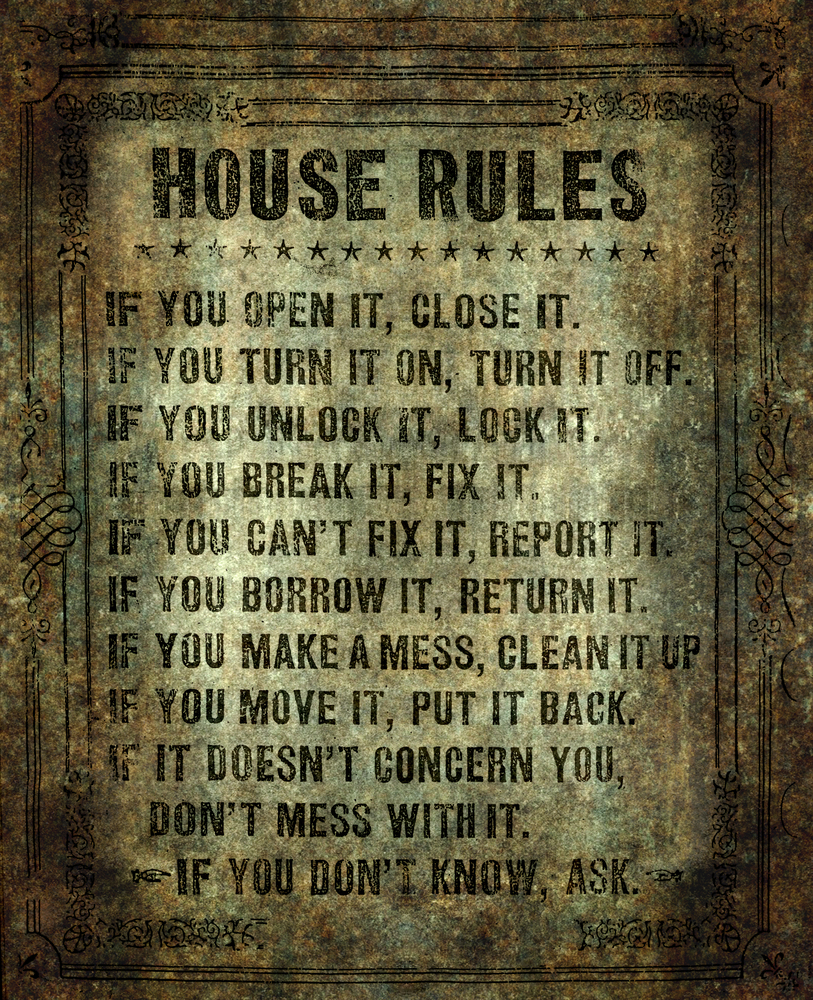 THE ART OF COMMUNICATING STRUCTURE

Humans in general, and children in particular, need structure and routine in order to thrive. A home with no structure, a house without written rules and clear expectations is a house that is destined to become chaotic, destined for power struggles. Without rules and expectations, there is fear of lack of control and predictability. Generally, home rules need to be all inclusive, rules that apply to all ages. Rules need to be specific to your family’s needs and values, and that list needs to be revised, from time to time. There are rules of respect, (not to hurt anyone physically or emotionally, not to use someone’s items without permission, not to ignore each other) and rules of problem solving (everyone must take their equal share in household chores).

One of the hardest parts of rules and structure is to enforce these rules without punishing or threatening. How are we supposed to get people interested in accepting obligation to following house rules or structure, without the deterrent of punishment for disobeying? When structure fails, when rules are broken, some parents become aggressive/offensive, and start screaming. The greatest problem of enforcing structure through punishment and yelling is that the parent/mentor loses the most important part of structure: open, and eye to eye communication. Because many parents fear to get to that place, they take the other extreme, the passive one, and just ignore the fact that they and the family rules and expectations are being ignored. But there is always the beautiful balance between the extremes of aggressive and passive. The middle space is called assertive.

Yitro gave an example of speaking assertively to his son in law Moshe, when he relayed to Moshe the message that he is standing outside of the camp, waiting for Moshe to acknowledge that he came.

Just because, sometimes, you can’t ask for respect, it does not mean you can’t ask for basic human dignity, not to be stepped on. אֲנִ֛י חֹתֶנְךָ֥ יִתְר֖וֹ בָּ֣א אֵלֶ֑יךָ וְאִ֨שְׁתְּךָ֔ וּשְׁנֵ֥י בָנֶ֖יהָ עִמָּֽהּ I, your father in law, Yitro, came to you, and your wife and her two sons, with her. Moshe, at this point of his life, was the most popular and powerful person on earth. Yitro said to him, if you are not going to come out to accept me, your father-in-law, come out for my daughter, Tzipporah, your wife. Yitro was not asking for honor, which Moshe ended up giving – much more honor than any father-in-law can expect. Yitro was asking not to be disgraced. “If you won’t respect me for being your father-in-law, at least don’t disgrace your wife, Tzipporah.”

You can inspire, motivate and educate anyone, if you just know the right way to communicate to that person. This is something that needs thought and preparation of how to say what you need to say, in a way that they can understand. The best way to get anyone to do anything is knowing how to communicate its importance to them. If you know how to communicate the beauty and depth and truth of Torah, you can get the whole world to serve G-d and keep His Torah. Torah, itself, can be taught to anyone in the world; it is just a question of how you package the message. This is something that G-d made sure that we would be aware of, in the way He teaches Torah, Himself. Just one example: The Torah has two ways of speech. אמר ,he said. דבר  ,he spoke. Saying is softer, while speaking is harsher. When teaching Torah to the men, G-d uses speech, but when G-d communicates to the women, He uses a softer way of getting the message across. כֹּ֤ה תֹאמַר֙ לְבֵ֣ית יַעֲקֹ֔ב וְתַגֵּ֖יד לִבְנֵ֥י יִשְׂרָאֵֽל  When talking to the men, G-d wanted the message to be clear, mentioning punishment and detail to the men who are more receptive to it, using the word ותגיד. While when speaking to the women, to the בית יעקב, those who build the Jewish home, G-d prefers to speak softly, using the word אמר, and not mentioning punishment.

When G-d gave us the Torah, He communicated His G-dliness and commandments in a way that was uniquely suited to each and every person. As it says אָֽנֹכִ֖י֙ יְקֹוָ֣ק אֱלֹקיךָ אֲשֶׁ֧ר הוֹצֵאתִ֛יךָ מֵאֶ֥רֶץ מִצְרַ֖יִם מִבֵּ֣֥ית עֲבָדִֽ֑ים I am YKVK your G-d Who took you out of Egypt, from the house of bondage! Rashi asks the following question. What is the point in mentioning that G-d took us out from Egypt? It is superfluous! Didn’t the Jews, who just left Egypt 49 days earlier, know that G-d took them out of Egypt?

Rashi answers, that it is coming to tell you that G-d revealed Himself in different ways, which made things confusing. At the Sea, He revealed Himself as a mighty warrior יְקֹוָ֖ק אִ֣ישׁ מִלְחָמָ֑ה, and now, at Har Sinai, He was coming across as a “wise old man”. To make it even more misleading, everyone heard G-d’s message, according to who he was. An elderly person heard G-d’s voice as the voice of an older person; the youth heard His voice as the voice of a youth; a woman heard a woman’s voice, the wise heard a wise message, and the simple heard a simple message. (Shemot R. 29a) Each one heard a different sound and from a different place, as the passuk says, אֶת־הַקּוֹלֹ֜ת. Each one saw his/her own version of the meaning behind what was being said. This is why G-d is blessed as חכם הרזים, the Wise One of the secrets, when there are 600,000 Jews in one place: because G-d knows and appreciates the differences of the 600,000 different opinions, and He knows how to communicate the reason of His commandments to each one of the 600,000, in a way that is unique to each one, simultaneously. This is why G-d made sure to mention, “I am your G-d who took you out of Egypt.” Despite the confusion, it is all one G-d, the One that took you out of Egypt!!! This ability of G-d, of knowing and appreciating the differences of opinions, is crucial in leadership, getting followers to do what is most important. This is why, when Moshe asked G-d to appoint a leader for the Jews after him, he asked for someone who had this ability.  (Midrash R. Pinchas)

You can’t lead the house, the synagogue, the community, you can’t set the rules and guidelines without acknowledgement of all the parties involved. Just because you understand and are open minded to the opinion, it does not mean that you accept it. Appreciating opinions is the beginning of the search for truth, as long as you investigate the honesty within each and every opinion. Yitro tried serving all the gods of the world, before he converted to Judaism. He was consistently searching for the truth, not trying to fool himself, or live a lie. Yitro had these two traits, open-mindedness, and search for the truth. Just because he entertained a thought, it does not mean he ended up with it, regardless of whether it served him better. This is why he ended up with the truth.

Only a calm voice can communicate your truth.  Those who scream and shout and threaten are not backed by the truth, or don’t have enough clarity about it. It takes time and patience to communicate effectively, to provide the necessary rules of life for each person on his level; but, it is the only way. The basic principle of leadership is to be able to appreciate and understand the vast spectrum of opinions of the parties involved, and communicate, effectively, to all of them. It takes time and guidance to communicate the truth, to each person on their level, but it is the only way to have a clear set of rules – a plan, a map.  You can’t and won’t hear the opinions of those you need to work with, if you scream when you are ignored, if you threaten, when disobeyed. You need to hear the opinions, search for the truth, and then bring out the truth via communication and structure. This is your job as a parent, as a teacher, as a leader.

← THE ART OF KICKSTARTING YOUR DAYTHE ART OF SENSITIVITY →