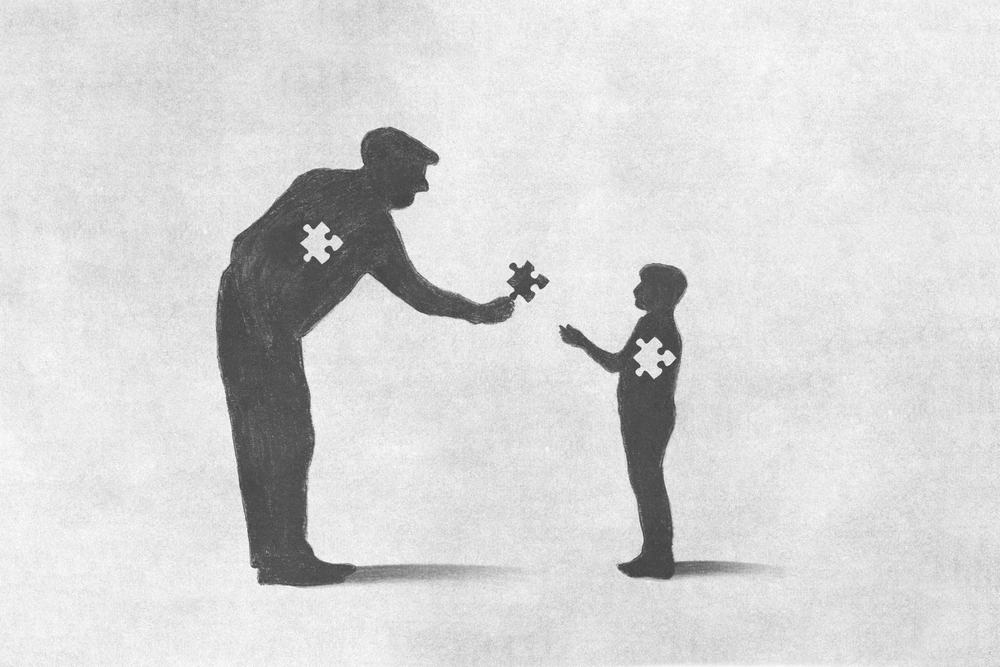 THE ART OF PARENTING

Avraham Avinu was the first Mechanech, the first educator, וַיָּ֨רֶק אֶת־חֲנִיכָ֜יו. He knew that the most important part of Chinuch is not what you say, but how you behave. כִּ֣י יְדַעְתִּ֗יו לְמַעַן֩ אֲשֶׁ֨ר יְצַוֶּ֜ה אֶת־בָּנָ֤יו וְאֶת־בֵּיתוֹ֙ אַחֲרָ֔יו וְשָֽׁמְרוּ֙ דֶּ֣רֶךְ יְקֹוָ֔ק  G-d said, I must tell Avraham, that I plan on destroying Sedom. Because I know that he will command his sons, and his household, after him, to keep G-d’s way… One second. Why is the word, אחריו, after him, mentioned? Isn’t it superfluous? Just say that Avraham will command his sons! What are the words, “after him”, coming to teach us?

The main thing in Chinuch, what lasts, is not what you say, as much as how the children will copy your behavior, after you! One word, אחריו, says it all! The one word has two Chinuch definitions. 1. After you, or copying you. 2. After you are gone. After parenting is over. What lasts.

Chinuch does not happen right away. Children don’t listen when you tell them what you tell them. They copy what they see in you. They follow you. Not immediately, but eventually. Of course, you have to let them know, in as few words as possible, what needs to be altered in their behavior, and you need to sandwich the salty criticism on both sides with sweet words of love, respect and understanding. But you can’t turn your child’s behavior like you turn a doorknob. You need to make an order, and wait patiently, until the message is recognized. Rabbi Lawrence Kelerman put out the classic works of R Wolbe on Chinuch, that real Chinuch is Planting, Building, and Praying, all in the long term. Not forcing, lecturing, or manipulating.  In the teenage years, the kids will do summersaults in the air… but eventually, the time will come when they land exactly the way they saw you as you brought them up with love. The apple won’t fall far from the tree, even though it does not fall in a straight line.

Every child writes an imaginary letter to his Dad, from his subconscious. “Dad! You don’t know it right now, but I am watching you! I am watching the things you do! I am watching the way you treat people… The way you treat me, my mom, my brother and my sister… The way you live your life is having a big impact on me… When it is time for me to choose a career and provide for my family, your work ethic will be on my mind… The time you spent with me, even doing simple things, will give me a sense of security… There will be times in my life where I will struggle with integrity, and I may not be sure what to do. But I will recall how you stood up for what was right, even if you could have looked the other way… The choices you are making, I will also make… Please don’t be afraid to show me your failures, to show me your mistakes. I will learn from them… Dad, are you listening? I am watching you! I am watching to see if you really believe what you say about G-d! I need your help to show me the way… To show me how to live life that isn’t safe, but is good… I am watching you Dad, every day. You are teaching me how to live, whether you know it, or not!”

Stop! Read that letter one more time! Do I really believe what I say about G-d? About Olam Haba, about Him listening to my every word of prayer, looking into my heart, focusing on what I am focused on? והגיון לבי לפניך. Do I really believe what I say that the Torah is the most important thing? וחיי עולם נטע בתוכנו Am I for real when I say, כי בך בטחנו ועל חסדך הגדול באמת נשעננו, that I trust in You, G-d, and on Your great kindness, I am so dependent!  I know that G-d knows what I believe, but real Chinuch means that my kids also know what I really believe, even more than I realize what I believe!! Dad, who are you fooling? Just like if there was a stain on the back of your shirt or on the seat of your pants, that you can’t see, but they can… they can see you more than you can ever see yourself! They can see what is in your heart from your moods and behaviors! Let me tell you one of my favorite Chinuch Stories. The story of Menashe, the wicked king.

Hizkiyahu, the righteous king, knew in his Ruach Hakodesh, that he would have a son who would be the most wicked king of the Jewish People, so he never married. The prophet Yeshayahu came to Hizkiyahu with the prophecy that he will die, because he does not want to have children, saying, “Why are you getting involved in G-d’s future calculations!” Yeshayahu tells Hizkiyahu, he will die. Chizkiyahu says to the prophet Yeshayahu, “Let me marry your daughter; maybe in the merit of both of us, we will have offspring that won’t be so wicked.” Yeshayahu ben Amotz, says, “Sorry, Chizkayahu.  You are ‘Game Over’ – you have no hope.” Chizkiyahu says to prophet Yeshayahu , “Ben Amotz! finish your prophecy, and get out of my palace! I have, handed down from my ancestor, King David, that even when a sharp sword is on your neck, don’t give up on G-d’s mercy!”

Hizkiyahu turned to the wall and prayed, from the deepest place in his heart, to get another chance at life. And he did. He married Yeshayahu’s daughter. He had two sons, Rabshakeh and Menashe. He wanted to instill in his boys fear of Heaven, so King Hizkiyahu, would carry his two sons on his shoulders, each day to Yeshiva. One day, he heard one child saying to the other, “Dad’s head is big, and it is perfectly suitable to sacrifice upon it for Avodah Zara.” Hizkiyahu was furious and he threw his two boys to the ground. Rabshakeh died instantly, but Menashe survived. Menashe became Hizkiyahu’s nightmare, as he grew to be a king that filled the land of Israel, and the Temple, with idols. He was so wicked, he even killed his own grandfather, Yeshayahu the prophet.

But then came the day, when the Assyrian king captured the wicked King Menashe, and put him into a copper pot with small holes. The put this pot on a low flame, so that Menashe would die a painful, slow death. At those moments, Menashe remembered what his father had taught him. He turned to G-d and said, “I remember the passuk of my youth my Dad taught me, בַּצַּ֣ר לְךָ֔ וּמְצָא֕וּךָ כֹּ֖ל הַדְּבָרִ֣ים הָאֵ֑לֶּה בְּאַחֲרִית֙ הַיָּמִ֔ים וְשַׁבְתָּ֙ עַד־יְקֹוָ֣ק אֱלֹהֶ֔יךָ וְשָׁמַעְתָּ֖ בְּקֹלֽוֹ: When you will be in difficult times, and all these things happen to you at the end of days, (all the punishments of the Torah for disobeying G-d’s word) and you will return to G-d and you will listen to His voice… כִּ֣י קל רַחוּם֙ יְקֹוָ֣ק אֱלֹקיךָ לֹ֥א יַרְפְּךָ֖ וְלֹ֣א יַשְׁחִיתֶ֑ךָ וְלֹ֤א יִשְׁכַּח֙ אֶת־בְּרִ֣ית אֲבֹתֶ֔יךָ אֲשֶׁ֥ר נִשְׁבַּ֖ע לָהֶֽם: For G-d is merciful, He will never let go of you, and He will never destroy you, and He will never forget the treaty of your forefathers, that He swore to them… Menashe, then said, with audacity, “So, G-d, I am calling out to you now! If you answer me, great! If not, all the idols and gods are the same!” Has Veshalom!”

The angels blocked this prayer from going up to G-d! They closed all the windows of Heaven! They said to G-d, “Master of the Universe!  A person who put an idol in Your Bet Hamikdash,.. will You accept his Teshuva now, when he is desperate for Your miracles?!?” G-d said, If I do not accept His Teshuva, I am locking the door for all future Baalei Teshuva! G-d then made a tunnel under His Holy Throne, accepted Menashe’s prayer and returned him to Yerushalayim. (Pesikta DR’ Kahana, 24)

What I love about this story is that Hizkiyahu was right not to want a child like Menashe, but he was also so wrong! Look at the lesson for all sinners of future generations that came out from this sinful son! And look at how Chinuch can come out only years later in a child, when the child is up on center stage for his life Tafkid! His life’s mission! And what lesson did Menashe remember from his father?? Exactly what Hizkiyahu himself did, when he was in trouble and was supposed to die! He turned to G-d from the deepest place in his heart, at the last minute! With G-d, it is never “game over”, until it’s over!

The problem is we look at the child in the present, and we try to fix the present, not the future. But let us not forget the Midrash in Kohelet. At one year old, a person is compared to a king: he is put in a cradle, and everyone is hugging and kissing him. Two- and three-year-olds are compared to a pig, that gets himself all dirty and sticks his hands in the toilet. At ten, a person is like a goat, as he jumps all over. A twenty-year-old is like a horse, standing tall, making himself look as good as he can, as he tries to find a wife. He gets married, and then, he is like a donkey, as he readies himself to carry the family load. His hairline goes up, belly goes down. He has kids, and now he is brazen like a dog, looking for bread and food to provide for his family, always sniffing out investment opportunities and new streams of income. He gets older, and he becomes like a monkey. Look at the old man’s shoulders. He tries to copy the youth, but he can’t!

Allow your child to transition through his phase, it will pass along with the acne of the age! If you try to pop the acne of teenage, you will make scars for life. Just be gentle, as soft as cream, and let it all pass! If you feel the child is acting like a Rasha, it is not his fault! That is the way G-d made him! כִּ֠י יֵ֣צֶר לֵ֧ב הָאָדָ֛ם רַ֖ע מִנְּעֻרָ֑יו It is our job, as parents, to make this “naturally bad “Thing”, almost an animal, into a human being!

← THE ART OF SOCIAL CHOICETHE ART OF CHOOSING FRIENDS →