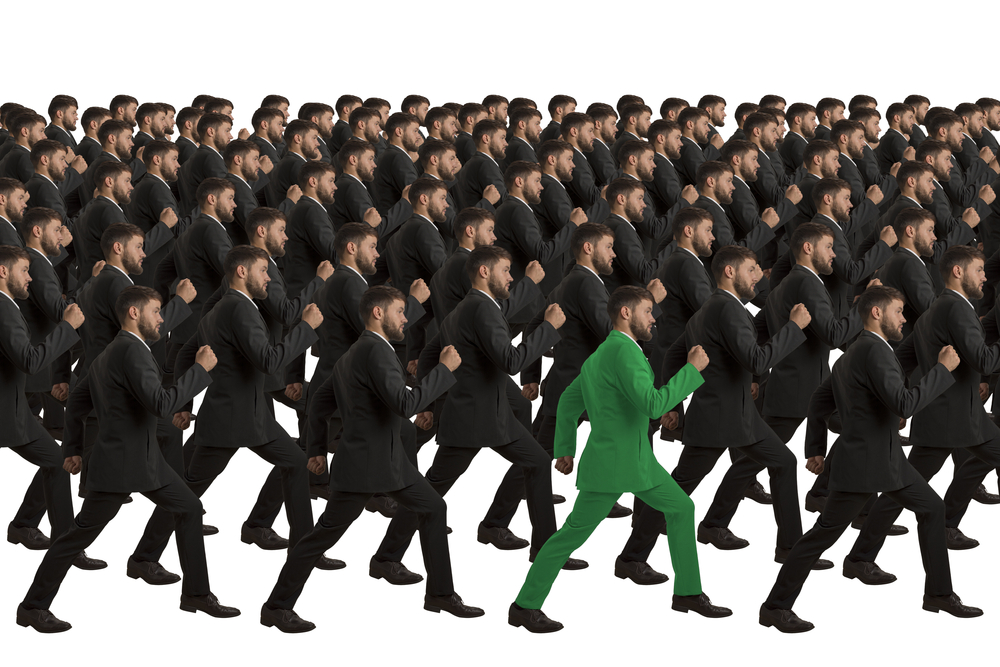 THE ART OF SOCIAL CHOICE

Probably the most sold self-help book of late is Atomic Habits, by James Clear. Here is a small part of his book, probably my favorite part. I adapted it and made it parsha-sheet appropriate:

Humans are herd animals. We want to fit in with the tribe, to bond with others, and to earn the respect and approval of our peers. The herd inclination is essential for our survival. Pioneers get slaughtered, settlers prosper. The lone wolf dies, but the pack survives. As a result, one of the deepest human desires is to belong.

We don’t choose our earliest habits, we imitate them. We follow the script handed down by our friends, family, yeshiva, synagogue. Each herd has its own expectations and standards – when to get married, how many children to have, how much money to spend. The herd and the hype of the herd are the invisible rules that guide your behavior, each day. You’re always keeping them in mind, even if they are not at the forefront of your thinking. Often, you follow the habits of your culture without thinking, without questioning, and sometimes, without remembering. Society sweeps us along. Everyone wants to belong. We imitate the habits of three groups in particular.

The close. Proximity has a powerful effect on our behavior. We pick up habits from the people around us. We copy our parents, peers, roommates, and coworkers. We automatically assume the body posture of the person we are connecting to in conversation, and we imitate the accent of the locals. The closer we are, the more likely we are to imitate. Your chances of becoming obese increase by 57% if you have a friend who became obese. It works the other way, too. If your partner is losing weight, you would also slim down a third of the time. Our friends and family provide a sort of invisible peer pressure that pulls us in their direction. Peer pressure influences our life choices, goals and careers. One study found that even our IQ is affected by the people around us, as we soak up qualities and practices from those around us. One of the most effective things you can do to build better habits is to join a culture where your desired behavior is the normal behavior. Going with the group does not feel like a burden. Behaviors are attractive when they help us fit in. You rise together with your surroundings, as your culture is what sets your expectation for what is normal. If you want to grow in any area, look for people who are growing in that area, and join them.

The many. Whenever we are unsure how to act, we look to the group to guide our behavior. We are constantly scanning the environment and wondering, “What is everyone else doing?” We want to imitate the best buying, eating and travel habits. It’s usually a smart strategy. There is evidence in the numbers. But, there can be a downside. The normal behavior of the tribe often overpowers the desired behavior of the individual. There is tremendous internal pressure to comply with the norms of the group. The reward of being accepted is often greater than the reward of winning an argument, looking smart, or finding truth. Most days, we’d rather be wrong with the crowd, than be right with ourselves.

The powerful. Humans everywhere pursue power, prestige, and status, to be acknowledged, recognized and praised. People with higher status have access to more resources.  We are drawn to behaviors that earn us respect, approval, and admiration. Once we fit into the tribe, we start looking for ways to stand out. So, we try to mimic the successful people, the people we admire, because we desire success ourselves.

As great as this concept from James is, what about the person who is already successful? Already an influencer? Does he, also, have to fear the flock, the herd inclination? In his introduction to Parashat Lech Lecha, Rabbenu Bachye brings the words of King Solomon. הוֹלֵךְ אֶת חֲכָמִים יֶחְכָּם וְרֹעֶה כְסִילִים יֵרוֹעַ The one who constantly goes with the wise, he will become smarter. And the one who hangs around with the fools, he will worsen his present status. The Torah is compared to a candle, as the light of wisdom is shared and given to others by the Wise, while the wise man, himself, does not lack wisdom, no matter how much he gives.

Who are the fools that a person should avoid, so he does not lose his status? People with bad Middot and character, people who are chasing material desires and people who are belittling true wisdom. Your social choice is so important that King David decided to begin his book of Psalms with precisely this: אַ֥שְֽׁרֵי־הָאִ֗ישׁ אֲשֶׁ֤ר׀ לֹ֥א הָלַךְ֘ בַּעֲצַ֪ת רְשָׁ֫עִ֥ים וּבְדֶ֣רֶךְ חַ֭טָּאִים לֹ֥א עָמָ֑ד וּבְמוֹשַׁ֥ב לֵ֝צִ֗ים לֹ֣א יָשָֽׁב.

This was the first commandment by G-d to the first Jew: G-d told Avraham to leave his homeland. This was also Avraham’s first test, because it was hard to understand. Avraham would get influenced?! He didn’t start off as a regular guy who built himself up. He was destined for greatness from his birth! His mother, Amatla Bat Carnevo, gave birth to him in a cave, as Nimrod, king of the world at the time, killed 70,000 babies, out of fear of what Nimrod’s stargazers warned him: The person who will take you and your beliefs down will be born in the near future. So Amatla gave birth to Avraham in a cave, and he lit up the whole cave, with his natural light. “Better I should leave this baby boy here in the cave, alone, than take him with me and see him slaughtered by Nimrod!” G-d made a miracle, and Angel Gabriel came to prick Avraham’s finger, causing milk to flow from it. Baby Avraham nursed from his own finger! At ten days old, Avraham started to walk the land…(Midrash, brought in Shevet Mussar)

Avraham revealed to everyone the truth of who Nimrod’s father was, as Nimrod claimed he was not born to parents. Avraham undid Nimrod’s claims that fire is God, and he stood up to the challenge and miraculously survived being thrown into Nimrod’s blazing fire – the fire that was so intense that Haran, Avraham’s brother, had his intestines burned out, just from getting close to it! (Arizal tells us that Haran came back as a Gilgul in Aharon, as they share the same letters.) We are talking about very high neshamot, from birth!!! And after this miracle that the whole population of Ur Kasdim witnessed, Avraham and his wife Sarah become the kiruv king and queen,   .וְאֶת־הַנֶּ֖פֶשׁ אֲשֶׁר־עָשׂ֣וּ בְחָרָ֑ן And (they took with them on their trip) the souls that they made in (the city) Haran. And still, G-d tells Avraham leave, so that you don’t become influenced!!!

Lately, I have been teaching Sefer Hamitzvoth of the Rambam, and to find the reason for each Mitzvah, I learn the Sefer Hachinuch. You would be shocked to see how many Negative Commandments are given so that you do not learn from the wicked! Even the reason why one cannot marry a gentile is so that the gentile spouse does not persuade you to serve his or her gods!!! The problem is that we think that we are smarter than that! We think that we are above that, and that we will not be influenced, we will not be persuaded – everything will be fine! One second: are you smarter than King Solomon, who thought he would not be persuaded? The Talmud tells us that a person should always live in the city of his rabbi, because the day that King Solomon did not live in the city of his rabbi, (Shimi Ben Gera) he made the mistake of his life, marrying Bat Pharoah. (Berachot 8a) Shlomo Hamelech, the smartest of men, son of King David, was seemingly smart enough to make his own decision, but that decision is what brought the angel Gavriel to put a rod in the middle of the Mediterranean that eventually became the boot of Italy, the home of Rome, that destroyed our second Temple! (Shabbat 56b) He thought that if the Torah forbade having many wives because they can influence one’s heart, that he was smart enough not to be persuaded! (Gittin 58b) King Yoshiyahu, one of our best, most pious kings ever, and a possible candidate to be Mashiach, made the mistake of his life, going out to fight against Pharoah, where he lost the battle and got killed. Why? Because he did not consult with the prophets, Eliyahu, or Elisha. (Melachim B;23:29) Hizkiyahu, also one of the greatest kings we have had and, also, a possible candidate to be the Mashiach, made one of the biggest mistakes of his life, by showing the Babylonian leaders all of his treasures. He did not consult with the prophet Yeshayahu, and G-d relayed to Hizkiyahu, through the prophet Yeshayahu, that his descendants would be slaves to these Babylonian “friends”. (Yeshayahu 39) It seems that the mistakes of social choices, who we bond with and who we don’t, are a lesson from history that repeats itself, and a lesson that we keep forgetting.

Avraham, himself, made this mistake. He made a treaty with Avimelech, without having consulted, first, with G-d, and because of it, Avraham’s descendants did not take over the Holy Land for 7 generations!!! (Messilat Yesharim chapter 4 brings the Midrash B”R) The Torah tells us,   לֹא־תִכְרֹ֥ת לָהֶ֛ם וְלֵאלֹֽהֵיהֶ֖ם בְּרִֽית (Shemot 23;32) Don’t make any peace treaties with the seven nations of Canaan! So that you do not learn from them!

This does not mean to leave your bad friends in a way that is rude or insensitive! They were your friends until now, and you need to acknowledge that. Even Avraham, who had Lot with him, did not tell Lot, “You can’t come with me!” Avraham waited for the right excuse, for the dispute over Lot’s unmuzzled cattle, to tell him that they should go their separate ways! This is despite the fact that Avraham knew, all along, that having Lot in his company was preventing him from having G-d speak to him!

← THE ART OF BEING PROTECTEDTHE ART OF PARENTING →