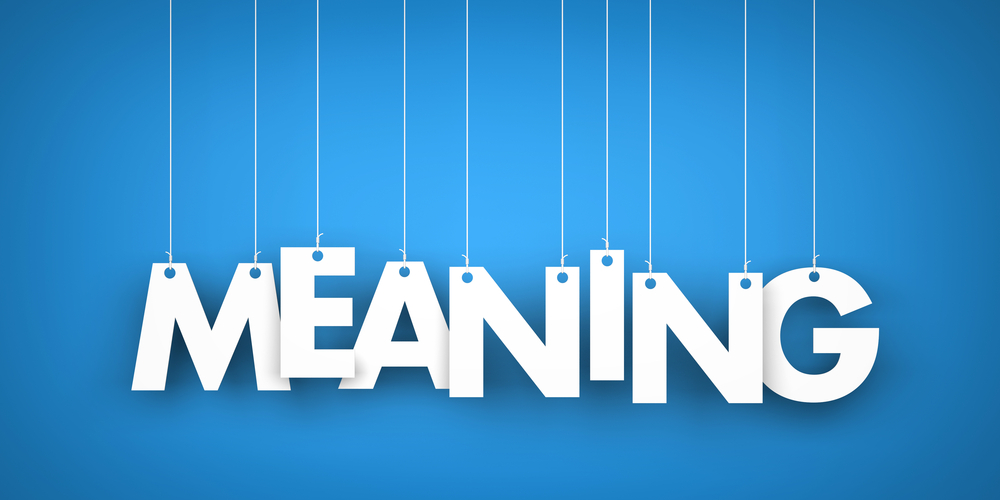 THE ART OF MEANING

Feb. 10, in 2020, I boarded a United flight, Ben Gurion- Newark, and the two Israelis sitting next to me came on the plane with KN95 masks and gloves. The first thing they did was wipe down the handles, tray and screen of their seats with alcohol wipes. They asked me if I wanted them to do the same for me. Totally confused, I said “No, Thank you”. They asked me if I was suffering from any disease. I said “yes”. They jumped out of their seats and asked me what it was. I told them. “Athlete’s foot” They laughed so hard at my joke, and with a sigh of relief, sat back down. I have become addicted to the News since then, and I am trying to detox. It is not that being updated with the news is not important. But it is the meaning that we give the world events that is important.

The meaning we give to everything is important. The meaning of a cough, a sneeze, a mask. The meaning of school teachers, systems, structure, and the meaning of normal. How things have changed in one year, and how the meaning of things changed in one year… I had this crazy observation. The difference between the Tzaddik and the Rasha is, literally, experiencing something and giving it a meaning different from what our Yetzer gives it. This is the lesson of ס’,ע’,פ’,צ’ The letter ס’ is closed. The letter צ means Tzaddik. If you want to be a Tzaddik, you need to close your Ayin and your Peh. Your eye and your mouth. What does this mean?

The reason why a Canaanite slave goes free when his master knocks out his tooth or eye is his Grandpa Ham. Ham, son of Noach, saw his father’s nakedness and let his brothers know about it, using his tooth to express his meaning of what he saw. This is why the Canaanite slave, the descendent of Ham, is released when his eye or tooth is knocked out, because the “eye” and “tooth” of his grandfather is what got him into the curse of slavery in the first place. (Lekach Tov) I believe this is a great lesson. Your life, your productivity, is always dependent on two things: what you focus on and the meaning you give it. The words you use in your inner lexicon (Tooth) to describe what you experience (Ayin). A new meaning to the passuk וְלֹֽא־תָת֜וּרוּ אַחֲרֵ֤י לְבַבְכֶם֙ וְאַחֲרֵ֣י עֵֽינֵיכֶ֔ם. Do not stray after your heart and eyes.

Happiness comes to those who find the truer meaning, and Judaism is about finding the truest meaning in everything. Everything that happen to us, can help us understand better who we are and who we are not, what is important, and vice versa.  לַיְּהוּדִ֕ים הָֽיְתָ֥ה אוֹרָ֖ה וְשִׂמְחָ֑ה וְשָׂשֹׂ֖ן וִיקָֽרThe Jews realized after the Purim story, that the light in life is the Torah, for Torah reveals to us the real meaning in the “dark” world we find ourselves in each day. They realized that true happiness in life is Yom Tov, the commemorations in our calendar of times we reached a higher plateau of meaning and contemplation, and we are to refrain from work so that we can contemplate again. Joy is Brit Milah, self-restraint, purity, the joy of missing out, and trusting that if G-d did not give me something or allow me something, there is a meaning behind it, and it is the very best thing for me. Preciousness is Tefillin, there is nothing more precious than having an opportunity to be G-d’s servant, G-d’s knight, in this world. (Megillah 16b) How ironic that the man who was named after happiness, Yitzhak, (צְחֹ֕ק עָ֥שָׂה לִ֖י אֱלֹקים, יצחק ירנן) was the man known for his self-sacrifice, for giving up everything in life for its greater meaning, and the first “Charedi” (פחד יצחק). Real serving G-d, is happily serving Him. עִבְד֣וּ אֶת־יְקֹוָ֣ק בְּשִׂמְחָ֑ה ; תַּחַת אֲשֶׁר לֹא עָבַדְתָּ אֶת ה’ אֱלֹקיךָ בְּשִׂמְחָה. Because contrary to popular belief, happiness is found in living with the deepest meaning in life and in everything we do.

When we serve G-d, when we pray to Him, the only true way is with happiness, because if you are not happy while praying, if you are not happy when serving Him, you are not really praying to Him or serving Him. Finding meaning in life, in the world around us, is an עבודה, a practice. And the rule of life is, whatever you practice every day, you get good at, and by default, you are always practicing something. If you practice finding meaning in life, if you practice joy in your life, if you practice happiness in your life, you will become very good at it. On the other hand, if you practice complaining, if you practice living life without meaning and self- reflection, if you practice worrying, if you practice anger, you will be very good at complaining, at getting angry, at worrying, even when no one else sees anything to get angry, worry, or complain about… which brings people to addictions. All addictions are simply relationships with things, abusing the meaning or purpose those “things” were intended for. Addiction to alcohol, food, drugs, to looking where we are not supposed to, occupation with beauty, checking the news, making money, or getting “likes” and “views”.  Man’s search for meaning is why, according to Judaism, everything in life is a “test”. Poverty “means” a test from G-d to see if you can accept Him, and wealth “means” a test to see how you are going to spend it. And the test of wealth, respect, power, is a much greater test than the test of the lack of it.

It is amazing. Haman’s power, wealth, children, and connections all meant nothing to him if he could not be in total control over his world. If there was one little old Mordecai who did not bend the knee to him, he was outraged. This is a great lesson for all of us. What do power, connections, wealth all mean to you? So many people want to succeed in business, want to make it big. I ask them – how much money do you need? What is the purpose of your desire for wealth? If your drive for wealth is to see how much you are worth, you will never have enough. Because there is always going to be something or someone that is not going to care about how much you have, or respect and appreciate you for who you think you are.

This takes us to a whole new meaning behind the Purim story. Whenever we want to understand the meaning of something, we need to learn about its past, and its future. Learning the past and future of the Megillah story, will give us a new dimension of understanding it. Ever wonder how Achashverosh became so rich? Nevuchadnetzar, king of Babylon, who destroyed the first Bet Hamikdash, took all the 5,400 gold, silver and precious stone utensils and 180 treasure houses. Miser that he was, he made a copper boat and loaded it with copper containers, and he sunk this boat to the bottom of the Euphrates river. Korash, the king two years before Achashverosh, originally allowed the Jews to rebuild the Temple. In that merit, G-d revealed to Korash where to dig near the Euphrates and uncover the treasures. Achashverosh rose to power two years later, inherited this great wealth, (Y. Shimoni- Tanchuma) and his Queen Vashti persuaded him to stop the Jews from being able to return home and rebuild the Bet Hamikdash. On his third year in power, the year he believed that the 70-year prophesy that the Jews would return and rebuild the Temple were up, Achashverosh and Vashti believed that if G-d had not yet brought the Jews home, He must have given up on them, and the booty was all his for keeps. So, to flaunt his “control over the world”, that the Jews would forever be under his rule, Achashverosh made his feast to show off his wealth – 180 days, so he could exhibit, each day, another one of the 180 treasure houses of the Temple, while both Achashverosh and Vashti donning the clothes of the Kohen Gadol.  But G-d showed Achashverosh at his own party that he does not even have control over his own wife, Vashti.

We know that Achashverosh was wicked from his beginning until his end, ה֣וּא אֲחַשְׁוֵר֗וֹשׁ. He wanted to get rid of the Jews, as much as Haman did. Haman was doing Achashverosh a favor. So, how did Achashverosh have change of heart, when Esther told him that she was a Jewess? Originally, Achashverosh saw in the constellations that the one to take the throne after him would be a Jewish boy, so he therefore, wanted to get rid of the Jews. But when he learned that Esther was Jewish, it meant that their son would be Jewish, and his own son would merit the throne. Now, Achashverosh wanted to kill all anti-Semites! Three years after Haman’s death, Achashverosh died and left everything he owned, including the Temple treasures, to Daryavesh ll, the 7-year-old son he had from Esther.  At the age of 9, King Daryavesh allowed the Jews to rebuild the Temple, exactly 70 years from the time of its Destruction, and the Treasures were sent to where they were supposed to go. Esther’s fear of “marrying” Achashverosh was exactly what was needed for the Jewish people to have a Jew in power, to allow us to rebuild our Temple. G-d put the vessels of His Temple in Achashverosh’s hands, so that he would boast about having them and have Vashti killed, and so that Achashverosh and Esther’s son would be in the position to rebuild the Temple. Achashverosh saw the superficial ownership of the Temple’s vessels as “great” for him, and throughout the Megillah, he was struggling to keep control. But, as it becomes clear at the end, G-d was just using Achashverosh all along, for a plot much greater than himself.

← THE ART OF CHARACTER IMPROVEMENTTHE ART OF FUTURISTIC THINKING →