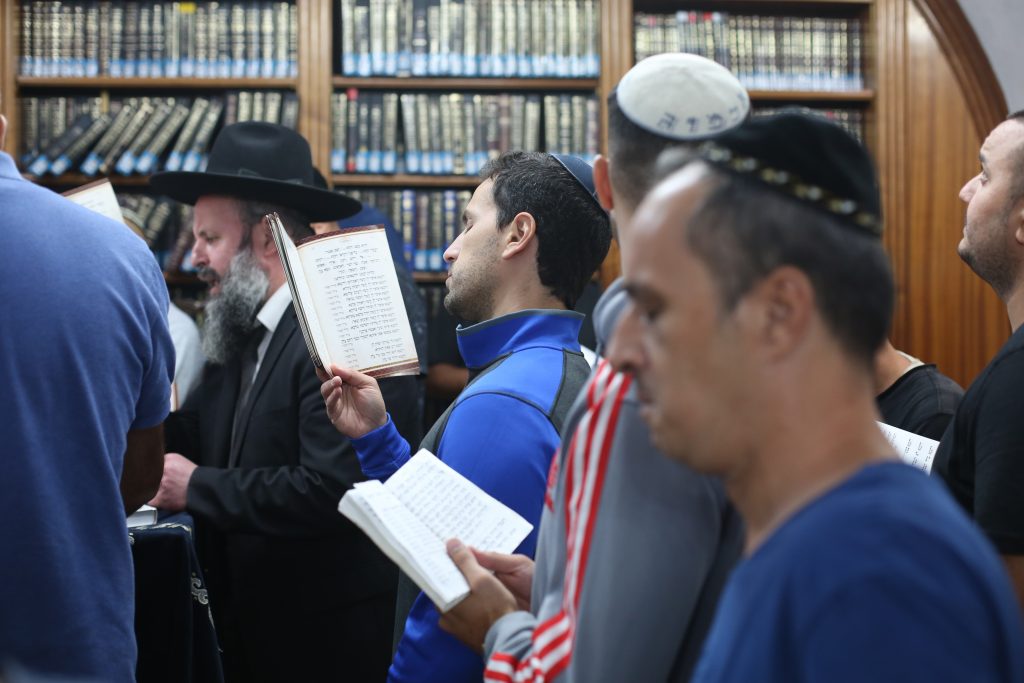 THE ART OF INTERGRITY

People lie much more than they think. “I’ll be there in 5 minutes”, even though you did not even leave the house yet, and you know it will take you at least 8.5 minutes to get there.  “I am careful with what I eat”, but that does not include what I eat in the dark, what I eat out of my home, holidays, or vacations, and what I eat when I am starving, or when no one is looking. “My health and family are my highest proprieties.” Even though I don’t live that way. You can fool some of the people all the time, and all the people some of the time… But once you are fooling yourself, you are really a fool.

I can never forget the time I heard a recording from 1980 from Rabbi Tzvi Aryeh Rosenfeld, zt’’l. “If you want Parnassa, you need to tap into the Shefa of the country you live in. Every country has its own Shefa, its own areas where G-d sends blessings of Parnassa. For example, the area of blessing in America, is in High Tech. (He said this in 1980!!!  Just look at how big FAMGA has become – Facebook, Amazon, Microsoft, Google and Apple.) In Europe, it used to be that if you wanted to make a parnassa, the Shefa was to become a Rebbe. How does one become a Rebbe? How does one build a following? Here is the secret recipe. Teach people who are easy to convince. It is too difficult to build a following among learned men. You need to teach either women or unlearned men, and then you build trust. Once women or unlearned men say that you are intelligent and wise, the word begins to spread, and then even the learned men start to believe that you are a Rebbe. This is dangerous, but as long as you know, deep down, that you are not a Rebbe, the situation can be controlled. The problem is out of control once you start to believe that you are actually as wise, intelligent, and saintly as your followers think you are.

The passuk says, תָּמִ֣ים תִּֽהְיֶ֔ה עִ֖ם יְקֹוָ֥ק אֱלֹהֶֽיךָ , you should be complete in your fear of G-d. (Onkelos) In the Sifri, it adds, when you live with integrity, you are in G-d’s hands, you are safe. When G-d asked Avraham to sacrifice his son Yitzhak on the altar, he asked him, “Please”. קַח־נָ֠א אֶת־בִּנְךָ֙ and the Talmud tells us that G-d asked Avraham, Please, Avraham, don’t fail this test, so that the gentiles and the prosecuting angels won’t say that the first nine tests that you passed were not real wins!

What?! How could you say that the first tests were not real wins?! The answer is that when it comes to serving G-d, G-d wants us to be real with our integrity in serving Him, that we are willing to give up everything for Him, our past, our future, our following, our fame, even our “religion”, for Him. He wants us to be תמים, completely honest with ourselves and faithful with Him. G-d asks us to blow the Shofar of a ram, and when we do, He considers it as if we performed an Akeida on ourselves! (Rosh Hashana 16a) G-d wants, more than anything on the high holidays, that we bind ourselves up as Akedat Yitzhak. Why? Because G-d wants us to be honest with ourselves, that we are willing to live and die for Him. למענך אלקים חיים

The place where we are most dishonest, where we fool ourselves the most, is in our prayers. When we say Modeh Ani, and we admit our total dependence to G-d and thank Him for putting a soul in my body, and specifically, my soul, are we for real? When we say, the word אתה, YOU, G-d, I am talking to You, do we really mean it? Who are we fooling? G-d?!? When we say, כי בך בטחנו ועל חסדך הגדול באמת נשעננו. Because in You we trust, and on Your great kindness we really rely. You can lie to everyone in your life, you can even lie to yourself, but you can never lie to G-d. The very introduction to Selichot and a central part of the High Holidays’ pinnacle prayer is actually this: הלא הנסתרות והנגלות אתה יודע אתה יודע רזי עולם ותעלומות סתרי כל חי אתה חופש כל חדרי בטן רואה כליות ולב אין דבר נעלם ממך ואין נסתר מנגד עיניך . There is no fooling G-d. This is a fundamental principle for Elul and a prerequisite to change.

The Talmud tells the episode when the Rabbis of the time came to King David, saying that the Jewish people need sustenance. He said to them, “Go and support each other.” They said, the handful (of the upper class) is not enough to satiate the lion (the lower class). He said, “Go out to war, and take sustenance from the enemy.” (Berachot 3b)

This is such a strange response from King David, almost as bad as the “If there is no bread, eat cake”, attributed to Marie-Antionette, the queen of France who was oblivious to the problems the poor were facing before the French Revolution. Why would King David say to turn to the rich to support the poor, if the rich said they are not able to! And who is to say that it would be a good idea to endanger the lives of the people by going to out to war, so that maybe they will win some booty?

The answer is that King David had entirely different intentions. As we see in Parashat Shoftim, before going out to war, the Kohen announces to all the people that those who have a new vineyard, a new house, a new wife should go home and not go to war. All of a sudden, you see streams of people disappearing from the ranks! Until now, people said that they do not have money to support the poor, the lower class; but now, you see who has vineyards, who has a new house, and who has a new wife.  David wanted to show the wealthy class that they were lying to themselves about how much they had!

Even the greatest people lie to themselves, if they are not learning Mussar constantly. When the prophet Natan came to David to rebuke him for his actions with Bat Sheva, he started by telling the great King David a bedtime story, a long story of a rich man who went and slaughtered the sheep of the poor neighbor, for his own needs. King David ruled, immediately, that the rich man deserved to die! To which the prophet responded, YOU ARE THE RICH MAN! You took Bat Sheva, and you manipulated Uriah’s death! Why didn’t the prophet Nathan just deliver a straightforward rebuke to King David? Why did he start with a bedtime story?!

The answer is that if the prophet had told King David that he had done wrong, King David would have “self-justified”. “Uriah, like all my soldiers, gave a divorce contract before war, in case he would not return.” “Bat Sheva was destined for King David from the beginning of time,…”  Nathan the prophet circumvented all self-justifications. Instead, he brought a Mashal in which King David ruled his own ruling, without even thinking to self-justify!

So many times, we self-justify not to give tzeddaka, not to keep the custom of maaser. This week, I suddenly had this thought that I should donate to my sons’ school $1000. I said to myself, It’s Elul, and if I thought of this today, let me go and take care of it immediately. After dropping my son off at school, I walked into the headmaster’s office, and told him about my pledge and handed him the money… but first, I wanted to know what he would use my donation for. Immediately, he said, that he has a reward program for the eighth graders to get them ready for high school: 90 boys are going to be tested on Gemara Massechet Succah, cover to cover. This money would go for that. I said, great! Before I left the room, he said, “ Yosef, you are an angel. Every year, for the last ten years, someone has sponsored this. This year, just yesterday, my regular sponsor told me on the phone that corona destroyed his business, and he can’t fill the thousand-dollar pledge this year. And just today, you come in, and offer that exact amount of money.”

How many times G-d gives us money to be someone’s angel, and we say, “Oh, but I need the money to live on the standard to impress the people that I don’t even care about?” You do have money, but you want to spend it on your house, your vineyard, your wife, just not tzeddaka!

The greatest rebuke we will get on judgement day will be that we lied to ourselves. (Breshit Rabah 93, 10) A person says he does not have energy to wake up early to learn and pray, but he has energy to go on business and pleasure trips? Who are we fooling? G-d?!? Eliyahu Hanavi met this fisherman, who was making fun of Eliyahu, who revealed himself as a Rabbi. Eliyahu asked the fisherman – you are making fun of me, but what are you going to answer G-d when you reach Heaven on judgement day? He answered, I will tell G-d, that when Heaven was giving out brains, they had none left for me. Rabbi, I can’t learn a Jewish Word. I can’t follow one word the Rabbi says in the class. I have ADD, ADHD, DVD, and USB.” Eliyahu asked the fisherman how he catches fish. The fisherman said, I make nets, and I throw them into the water, and I have a whole system to locate where the fish are, and when to lift the nets… Eliyahu said, Listen to what you are saying! You have brains to make money, but no brains to learn Torah!?!

לְדָוִ֨ד׀ יְקֹוָ֤ק׀ אוֹרִ֣י וְ֭יִשְׁעִי מִמִּ֣י אִירָ֑א  Rosh Hashana is referred to as אורי, my light, because through the mussar we learn in these days, we discover the lies and dishonesties we live by. If you are not learning mussar, there is no way you can realize how much self-deception has taken over your life.

← THE ART OF CRYINGTHE ART OF FIGHTING THE YETZER HARA →