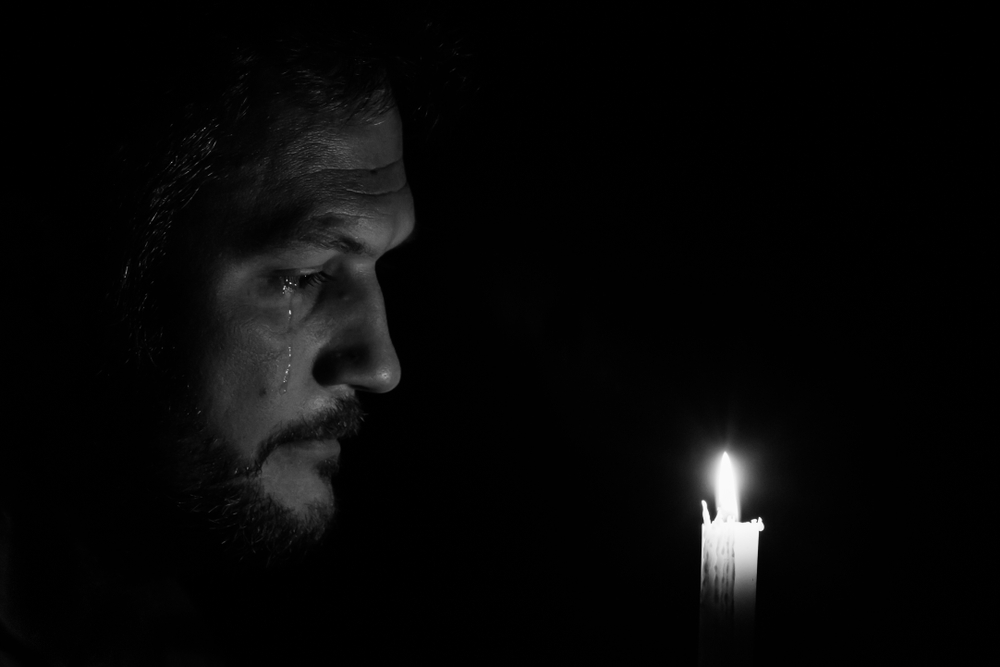 THE ART OF CRYING

Three tears dripped from Esav’s eyes, when he realized how his brother Yaakov had taken the blessings that his father Yitzchak wanted to give him. One tear dripped from his right eye, one from his left, and the third, Thank G-d, didn’t leave his eye: it just formed. The two tears of Esav over the loss of the blessing destroyed our two Temples, and if Esav would have cried a third tear, we would have no chance for a third Temple!

If a tear can do so much destruction, how much can it build? In the merit of these two tears, Esav merited the blessing that there would never be a lack of rain in his land, Har Seir. I looked on Google maps, to see this place Har Seir on the Jordanian side of the Dead Sea. It looks as dry as dust. Where is Esav’s land that is blessed with rain?

Any flag that has in it red (Edom), is a sign of Esav in that land, and any flag that has Green has Yishmael in it. Any script that is square and not round is Esav, not Yishmael. Esav prefers a more squared handwriting. Yishmael, Arab countries, on the other hand, prefer a more rounded handwriting. (Red and square, because Esav’s father was Yitzhak, Middat HaGevurah. Green and round because Yishmael’s father was Avraham, Middat Hachesed, Maharal) Europe, America, and Russia have plenty of rain, while the Arab lands, Africa, Asia, and Israel, lack rain. All that rain that Esav has had in all his lands, for thousands of years, is in the merit of two tears! (Tanhuma Kedoshim 15;Yalkut Shimoni 76; Midrash Sechel Tov Bereshit 27)

Rosh Hodesh Av is the Yahrzeit of Aharon, and for good reason. Aharon was, in certain ways, greater than his younger brother Moshe (Rashi, Vaera), and Moshe desired to die in the same way that Aharon did. What was the beginning of Aharon’s biography? How did this great man’s story begin?

When Batya, Pharoah’s daughter, saw the Teiva of Moshe, the box in which his mother Yocheved put him in the Nile so that she should not see him die… The story you were taught when you were 5 years old is that the boy Batya saw crying was Moshe. The Baal Haturim tells a different story. The child that was crying was Aharon, not Moshe! The words נַ֖עַר בֹּכֶ֑ה have the numerical value of Aharon Hakohen!!! When Yocheved put the three-month-old Moshe in the box, she put him next to the three-year-old Aharon, who would cry over him and worry over him!

This story makes so much more sense than the story we were taught in kindergarden! Every day, Pharoah slaughtered 150 boys for breakfast and 150 boys for supper, to “jacuzzi” in Jewish blood to calm his leprosy! Bitya became apathetic to the murdering of Jewish boys. Why would she become emotional about this one Jewish boy, Moshe? Another Jewish boy dying wasn’t strange for Bitya! It was the norm!  But a brother crying over the loss of his younger brother, that was strange for Bitya! A brother who cared, a brother who cried, who couldn’t stay home knowing his three-month-old brother was going to die… this gave Bitya the chills!!!

The gentiles don’t know of such things, that a brother feels his brother’s pain!  When Bitya saw Aharon cry, she knew,מִיַּלְדֵ֥י הָֽעִבְרִ֖ים זֶֽה, this is a Jewish child!!! She knew, at that point, that she wanted to be part of such a nation, a nation that cries for one another! Who needs all the wealth of Pharoah’s house, if no one really cares for you, all they want is your money! This Aharon, who cried for his brother Moshe when his brother was going to die and who rejoiced for his brother in his heart, when his brother was appointed to lead the nation instead of him, became the Kohen Gadol, the heart the deserved to have the Urim Vetumim with G-d’s Name, so close to it!

The 21 days of the three weeks energize the 21 days of the High Holidays, from Rosh Hashana till Simhat Torah. How so? When a person goes to a wedding at which he does not know anyone, it is hard to know who is family, who is closest with the groom, because everyone is drinking, making merry, dancing, having a good time – even those who are not so close to the groom. But when one goes to a funeral or shiva house, it is much clearer who is close and who is not. The ones who cry, are closest. The ones who don’t cry are not that close. If someone is happy, if someone rejoices during the three weeks of the High Holidays, it is not yet a sign that he is close to G-d, that he has a relationship with Him. But if someone cries during these days of Av, it shows, that G-d is his Av, his Father, and that he has a relationship with Him! These days are like black ink that we pour on paper, so that the High Holidays, the white ink, will have a stark contrast to shine on, and be prominent, in the boldest way!

G-d wants us to cry on Tisha B’av, during the three weeks, but we can’t. We don’t know how to cry for G-d’s pain. When the Temple was destroyed, G-d told Yirmiyahu, You don’t know how to really cry for My pain! Go call Avraham, Yitzhak, Yaakov, and Moshe from their graves! They know how to cry for Me! (Midrash Peticha Eicha) Rachel knows how to cry, like no one else, so that G-d has to beg her, מִנְעִ֤י קוֹלֵךְ֙ מִבֶּ֔כִי וְעֵינַ֖יִךְ מִדִּמְעָ֑ה Keep your voice from weeping, and your eyes from shedding tears! (Yirmiyahu 31; 15) We don’t know how to cry, because we are drugged with Esav’s Western Culture, and we don’t realize how much! When a person is taking Marijuana, he does not realize that he is drugged, he does not realize how he is not realizing his situation. He thinks he has it under control. Until I ask a Marijuana addict, Would you get onto a plane whose pilot is a Marijuana addict? The answer is, always, “Of course not”. “But you are the pilot of your own life! Why would your drug your own pilot?!”

If we can’t cry for our situation, of how far we are from G-d, it is because we are drugged by Western Culture, allowing Hollywood to define for us what is a successful life. Just know that G-d cries over you, when you don’t learn His Torah! He cries over His Temple, and over His Children who are so, so far from home! (Hagigah 5b) Our Rabbis tells us that the reason we lost our Land is because we did not make a blessing on the Torah. שלא ברכו בתורה תחילה (Nedarim 81a) The Alshich asks, how this can be true? Don’t we know that the reason why the first Temple was destroyed was because we transgressed the three cardinal sins?! If so, how could it be, because we weren’t learning Torah?!

The Alshich explains that this is why, even though the Jews committed the three cardinal sins, G-d did not want them exiled, as long as they were learning Torah. Torah is the music that G-d wants to hear,וְעַתָּ֗ה כִּתְב֤וּ לָכֶם֙ אֶת־הַשִּׁירָ֣ה הַזֹּ֔את   (Devarim 31; 19)  and when someone is learning Torah, no harm will befall him. But once the person stops learning, the protection is gone.

This is hard to digest. Does G-d want the Torah of those who are committing cardinal sins? The answer is, YES. The Torah is the only thing that fights the drugs of Western Culture. G-d says, I wish that, even though they have left Me, they still learn My Torah! (Midrash Eicha) Because the Torah is the cure for all bad drugs! All sins we commit are just because we are not learning Torah the way we are supposed to! If you would be connected to Torah, you would feel the way you are supposed to feel, and cry the way you are supposed to cry.

Yosef and his brothers reunited through tears, and the final redemption will be with tears. בִּבְכִ֣י יָבֹ֗אוּ וּֽבְתַחֲנוּנִים֘ אֽוֹבִילֵם֒ (Yirmiyahu 31;8) Corona, Meron, Surfside, G-d please stop it all! We have cried for each other, from across oceans. We showed how we feel each other’s pain. Please, G-d! Bring us closer to each other, closer to Your Torah, and closer to YOU!