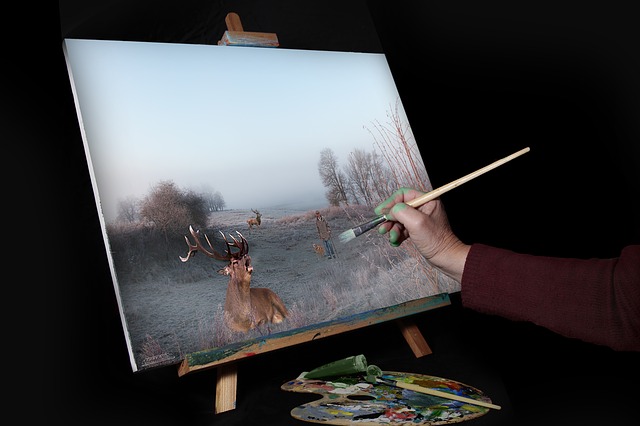 Dan shared his own twist to this, a brilliant concept. Every artist in the world attaches his signature to his work – otherwise, you can’t know who the artist is. But G-d is different. He does not put His signature on anything. Because everything is His signature. I felt that this is a great intro to the following life lesson.

Rachel, daughter of the philanthropist Kalba Sabua, knew she was doing the right thing by marrying Akiva, the shepherd. How did she know not to listen her father, that she should reject all the great rabbis she could have married, and, instead, give her hand to the divorced, 40-year-old shepherd who worked for her father?

The Talmud tells us. She saw that he was modest. צניע ומעלי )Ketubot 62b) The Pele Yoetz writes that the first thing a girl dating should look for in a husband is modesty. After modesty, see if he is a Talmid Chacham (Pesachim 49a). And next, see that he has a Rabbi he listens to. The Pele Yoetz goes on to warn that a woman should never marry a boy because of money, and she should not turn down a boy because of lack of money. Money comes, and money goes. But the boy she marries will stay with her forever (Pele Yoetz 109:2).

Modesty and humility are very different, although they are interconnected. Modesty is the reluctance to flaunt oneself, to put oneself on display or to attract attention.  Humility is about how you perceive your strengths and your G-d-given gifts.

As Dan beautifully illustrated, G-d is the most modest artist, and He commands us to be modest along with Him. וְהַצְנֵעַ לֶכֶת עִם אֱלֹקיךָ. Micha the prophet taught that Modesty is one of three fundamental principles of our religion (Makkot 24a). Why is modesty so crucial? Why is the virtue of modesty the key to all other virtues and spiritual success?

Avoiding external honor is one of the basic tenets of Judaism. Bear with me, as I take you for a ride. The ride of your life. This is the soul of each and every Jew. Literally.

We sing each day in our prayers, לְמַ֤עַן ׀ יְזַמֶּרְךָ֣ כָ֭בוֹד וְלֹ֣א יִדֹּ֑ם So that Kavod (honor) will sing to You and will not be silent. All of the commentators explain that Kavod, honor, in this context, refers to the soul. The Nefesh. Why is your soul “honor”? What is the connection? עוּרָה כְבוֹדִי עוּרָה הַנֵּבֶל וְכִנּוֹר אָעִירָה שָּׁחַר. Again. The word honor is used in reference to the soul. Why is the soul called honor? And why did G-d create the concept of honor, anyway? How many lives were ruined because of it? How many people were not able to achieve their life’s destiny, for they lived their lives with their eyes on the rear-view mirror, worried about what people might say about them, if they drove on to reach it? Each day in Shacharit, we say טוֹב יָצַר כָּבוֹד לִשְׁמוֹ Good He created, honor for His Name. What does this mean? In what way do G-d create honor for His Name?

One of the most fundamental questions of Judaism is the question R Yosef Kairo asked the Maggid-angel who taught him. If the soul came from such a high place, from under G-d’s throne, and the soul received there great pleasure from being close to G-d… Why did G-d send the soul down to this world, into a body, to do Mitzvoth? If anyway, in the end, if the soul accomplished its mission on Earth, it will return to the place of the souls, next to G-d’s throne?

The Maggid answered R’ Yosef Kairo that there is a concept called Nahama D’kisufa. Embarrassed bread. Nahama D’kisufa is a parable of a poor man that got bread from a rich man. Despite the fact that he enjoyed his meal, he is embarrassed that he is eating “bread of kindness”. A man who works for his bread, who paid for his meal with the sweat of his brow, does not feel embarrassed about the bread he eats. The lesson is that reward without effort, as in the case of the soul being close to G-d’s throne, is “embarrassed bread”. G-d therefore sends the soul down and commands it to keep the Torah and Mitzvoth. By fulfilling G-d’s commands, the Heavenly reward for one’s spiritual toil will be much greater than the original pleasure of the soul, for it will no longer have the component of feeling embarrassment.

Now, we can understand why G-d made the emotion called honor. In His infinite mercy and endless goodness, He wants the souls of mankind to have the ability to enjoy the ultimate pleasure of a deserved closeness to G-d. The purpose of honor is to enable you to enjoy your closeness to G-d in the next world at a whole new level, a more honorable level, a level of respect. This emotion of honor is the fundamental reason for which your soul came down to this world. Therefore, the soul is referred to as Honor.

Your choice in life is which honor you pursue. There are two types of honor in this world. There is the pursuit of internal, eternal honor, where a person focuses on a life of value, virtues and victory over the Evil Inclination. And there is temporary, external honor, i.e., looking to draw attention, to flaunt oneself, or to put oneself on display. The two types of honor are diametrically opposed and work like a seesaw. If a person lives with purpose, he does not need external honor. Modesty is the way to tap into your soul. Into eternity. Into a life of values, virtue, and victory over inclinations.

All of life’s blessings flourish when they don’t attract attention (Bava Metziah 42a). If you want to flourish, you need to pick the type of honor you want. A healthy ego is an ego that does not get its nourishment from external sources. A healthy ego does not need to take credit, in order to feel accomplished. Quite the contrary. A healthy ego gives credit and honor to others, as R Akiva taught his students, שלי ושלכם שלה.  All of my learning, and all of my student’s learning, is all in the credit of my wife Rachel.

← MIRROR, MIRROR ON THE WALLBIRDFATE →