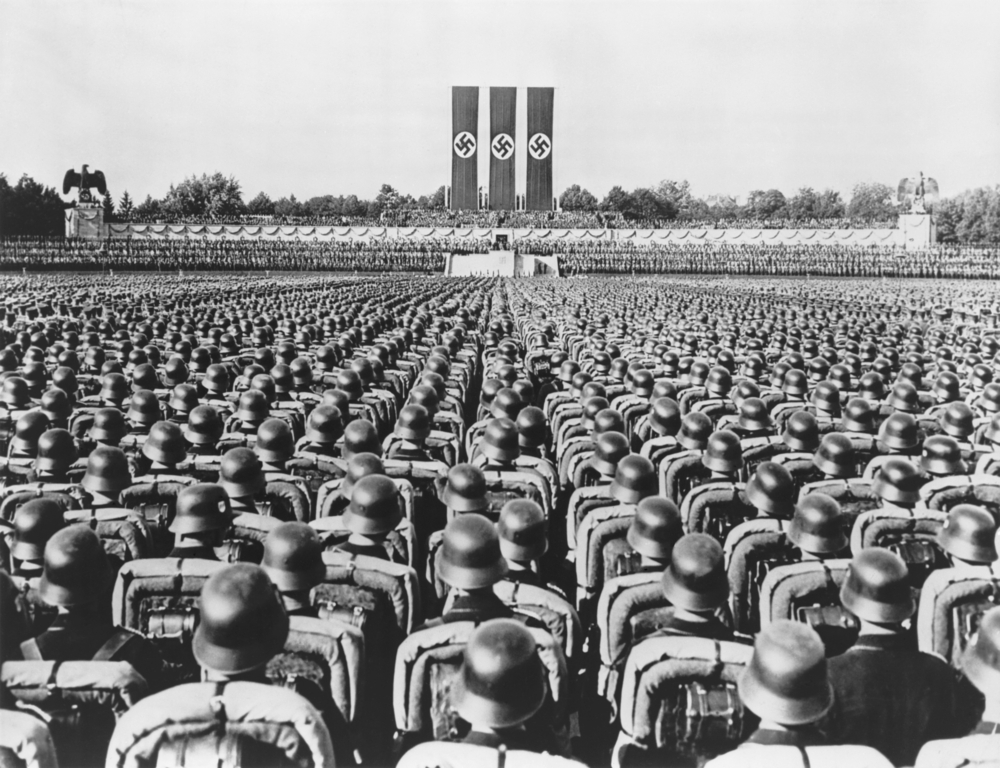 THE ART OF PUBLIC PERSUASION

One of the things that always boggled my mind, and the mind of every historian, is how Adolf Hitler, yemah shmo, a man who was no more than a high school dropout, a homeless, an unsuccessful artist, was capable of capturing the intelligent German minds and rising to power. He was not charismatic, had almost no friends, no connections and there was nothing of interest to him, outside his political life. All he had was an over-inflated view of his own intellect. He did not have any original ideas, and as we see, the mistakes that brought to his demise, we see how manic he was by fighting Russia, Britain and declaring war on USA. Being that people associate Hitler with the Devil, they tend to look past how he was a brilliant persuader of men. How could he murder so many Jews, while maintaining the full support of the German people? How was he able to persuade a nation that genocide was moral and ethical, and that Jews who do not kill, were immoral and unethical? Just by repeatedly calling the Jews a meek, spineless people who constitute a cancerous threat to society?!?

As Karl Schleunes, author of ” The Twisted Road to Auschwitz: Nazi Policy Toward German Jews, wrote: “He was not an interesting conversationalist; he was more like a dull person, except when he appeared before an audience, when somehow, a switch turned on. He could milk an audience and shape it and get it to feel.”  His strength lay in his talent as a speaker and in the tactics he used. He was known to write his speeches for days at a time, editing them up to five times. Time wasn’t important to him, when it came to writing. He would work all hours of the day and often into the early hours of the morning, for several nights in a row.  He workshopped his delivery, hand gestures and body language while practicing his speeches, body language being half of his message. He added animation to his language, in order to more forcefully communicate his ideas. He would make the German public feel like victims. In Mein Kampf, Hitler claimed that he was going to save Germany and the world, by killing the Jews. But what was it in his approach that was so hypnotizing? Was it just because he used the best microphone and speaker systems?

Hitler was quoted saying, “The receptivity of the masses is very limited, their intelligence is small, but their power of forgetting is enormous.” He learnt this early on in his career, before rising to power, when he would lead rallies. His persuasive method was built upon the foundation of treating the German people as a group, one entity, rather than as individuals. Why? Hitler learnt from Sigmund Freud that groups tend to have the characteristics of “weakness of intellectual ability,…lack of emotional restraint,…incapacity for moderation and delay, and the inclination to exceed every limit in the expression of emotion. Individuals are rational, think for themselves, and are concerned about their own well-being, whereas groups are unintelligent, have the mental capability of young children and are easily persuaded.”

Hitler used this understanding of group mentality to strategically manipulate the German people, and held events that required mass participation, where he could stand alone and lead the herd. Anyone who did not openly participate or share the emotion of the rest of the crowd was easily identified and dealt with, either by the crowd, itself, or by security personnel. He spoke to the youth, who are easier to make into a herd- mentality. As Hitler was quoted saying, “He alone, who owns the youth, gains the future.”

This explains why his body language was such a big factor in his delivery. This is in line with Freud’s belief that a crowd demands “strength or even violence” of its leaders: “It wants to be ruled and oppressed and to fear its master”. Hitler, ym’sh, conveyed a sense of strength and power through his speeches, during which he would yell and wave his arms violently.

Many world-class speakers know these truths about public speaking, at least subconsciously, and use these tools for the good. Some of the top coaches of the world have massive impact on people, only through rallying up the crowd.  And they make it hard for you to speak to them or get a coaching session in on a one-on-one conversation, because they feel comfortable only on stage, and when “you” are in the crowd. And even if they do have one-on-one sessions, they use the concept of riding the crowd, in order to build trust, which, hopefully, they use to provide you with more value than the money you pay.

People who get comfortable on stage eventually realize the following. You can do things at the podium that you can’t do, when you are one-on-one.  Being that the mind of the masses is weak, you can get the audience to cry, laugh, or change belief systems, moral systems, and ethical systems. You can get a crowd to escalate tensions and make a revolution, you can get people to give donations they would not otherwise give, all because of the psychology that makes crowds and herds dumb, while as individuals, people are smart.

Now, after that introduction, where do we find this life-tool in the Torah? That you can ride a crowd through public speaking and influence even an intelligent mass to accept the most irrational thought by giving them a herd mentality, even if you cannot convince one person?!?  That if you talk with confidence and victimize a crowd, you can get them to escalate tensions and throw off all authority? Of course, I would not compare anyone to Hitler, a maniac, and one of the most wicked men of history. But the method of public persuasion, that concept that Hitler used, is found in the Torah!

Korah used these same exact tools when he persuaded the people against Moshe and Aharon. Korah and his people accused Moshe of being a thief, although he never asked a favor from anyone or took anything from anyone. They accused him of being a liar, although in Parashat Pekudei, Moshe proved his honesty and trustworthiness, with the exact account of items for the Mishkan. They accused him of sleeping with their wives, although Moshe separated from his own wife, in order to be ready, always, for prophecy. And Korah accused Moshe for “making up” the Torah. (Midrash Yelamdenu) So, how did Korah persuade the people against Moshe?

1. The passuk tells us, in the beginning of the story, that they did not just speak to Moshe and Aharon, but  .וַיִּֽקָּהֲל֞וּ עַל־מֹשֶׁ֣ה וְעַֽל־אַהֲרֹ֗ן They congregated against Moshe and Aharon. Someone who studies the parasha will notice that Korah spoke only to the crowds; he gathered the crowds, to get his point across. Moshe answered Korach and the people, and no one responded to Moshe’s answer! When Moshe saw that Korah would talk only to the masses, and he could not have a discussion with him, alone he tried to have a discussion with Datan and Aviram; but they, also, said that they did not want to talk to Moshe! When Moshe realized this,  וַיִּ֤חַר לְמֹשֶׁה֙ מְאֹ֔ד And Moshe got very angry, and the Midrash says, because, no one wanted to discuss this with him! The Midrash teaches us, Korah was smart in his wickedness; he said, if I answer Moshe, I know that he is very smart. He will persuade me that he is right.  Better that I should not answer him. (Midrash Tanhuma Yashan 15) And then, when Moshe sets up the ultimatum, Korah does not respond to Moshe, but instead,  וַיַּקְהֵ֨ל עֲלֵיהֶ֥ם קֹ֙רַח֙ אֶת־כָּל־הָ֣עֵדָ֔ה , the whole night he went around to all the tribes, rallying and victimizing everyone: I am fighting your fight! Moshe and Aharon took Leadership and Priesthood and left us all with nothing!

Persuasion is not good or bad. It depends on what your intentions are, and what the outcome will be. Robert Cialdini has six principles of influence. Reciprocity; Commitment/consistency; Social proof; Authority; Liking; Scarcity. When combining “Authority” and “Social Proof”, the persuasion and influence can be super powerful.

← THE ART OF NOT BEING AFRAID