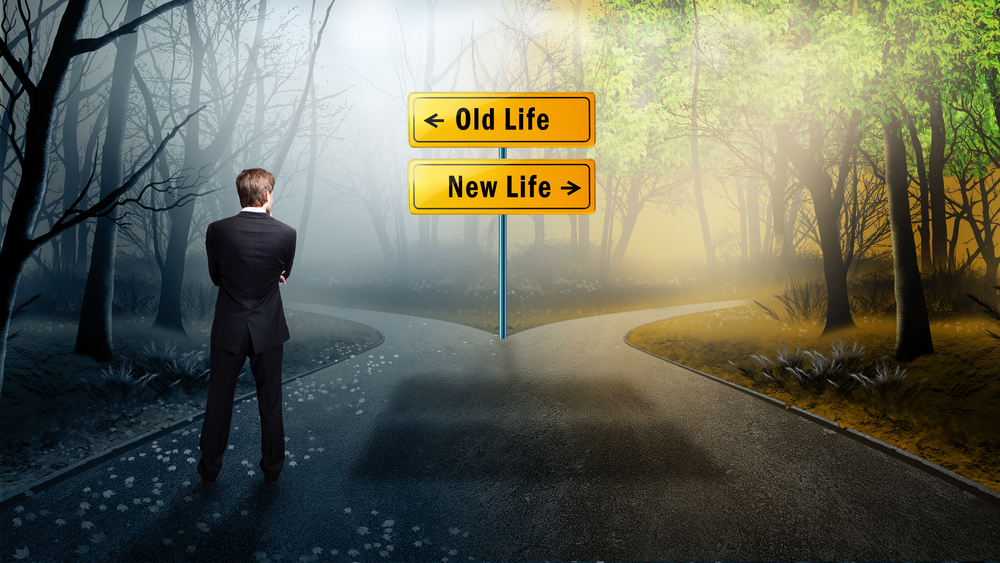 THE ART OF DIRECTION

For most of us, life can be split into two. The first part of our life, we form habits. The rest of life, we are on autopilot. How we eat, how we think, how we respond, what we value. It’s almost as if we have no free choice, something that G-d takes into consideration. כִּ֠י יֵ֣צֶר לֵ֧ב הָאָדָ֛ם רַ֖ע מִנְּעֻרָ֑יו. Because the Inclination of Mankind is bad from its youth. (Bereshit 8;21) The Baal Haturim comments on this, that from a person’s youth, he needs to fight his Yetzer Hara. And if he succeeds in conquering his Yetzer Hara from his youth, he will have a much easier time when he gets older. Because the power of the Yetzer Hara is, מנעוריו, from the habits of the youth. It’s funny that I once saw a self-help trick: whenever a person is in a place of temptation, he should scratch the stubble on his face, to remind himself, that he is a grown-up now, and he doesn’t fall for those old tricks of his inclination.

The Yetzer Hara trained you when you were so young and small to listen to his stupidity, that even later, as a “giant”, you still listen to his nonsense. We are all like the big circus elephant that obeys the small whip of the circus master, because he was trained to do so from when we were small. We are scared to disobey, and we are afraid of the whips of our youth, even though, those whips don’t hurt, now, any more than a mosquito bite.  We are like the bear that was trained to dance to music, because his trainer put burning coals under his feet: the bear heard the music and associated it with the coals – hence the “dancing bear”, even when there is just music without the coals.  Similarly, we hear the “music” and take the cue to “dance”, even there are no longer “coals” anymore under our feet. We have gotten used to so many cues, from our youth, that even if the reward is not there, we still dance to the tune of our Yetzer Hara!

So, how do we stop?!? From the day of our Bar or Bat Mitzvah, we have the power to change direction. The Ben Sorer Umoreh, the rebellious child, is held responsible, at the young age of 13- 13.5, to change direction, with this Yetzer HaTov. What is the secret? How does one change his כיוון, his direction? The answer, again, is hidden in the Dikduk, the secrets of the Lashon Hakodesh! He needs to change is כוונה, his intention! If he does not, he is punished for his indulgent behavior and for where it will lead him. He will, eventually, need to be a thief to live on his high maintenance budget, and he will eventually kill, in order to steal. But – wait a second. Listen to this! If a person kills, his death punishment is סייף, to be killed by the sword. But a Ben Sorrer Umoreh is given a harsher death than the one who actually kills! He is killed by stoning, סקילה! How could it be, that the one who killed is punished with a less harsh death than the one who is in the direction of killing???

The answer is because your direction, your thinking, has more weight in Judaism, than your actions! We see this in parashat Shoftim, with עדים זוממים, witnesses who plotted to hurt someone by falsely testifying against him in Jewish court.  The plotting witnesses are punished, only if they were caught before the verdict was carried out. Once the court ruled like they plotted, they are not punished when they are caught! Why?   וַעֲשִׂ֣יתֶם ל֔וֹ כַּאֲשֶׁ֥ר זָמַ֖ם לַעֲשׂ֣וֹת לְאָחִ֑יו and the Rabbis learn, כאשר זמם ולא כאשר עשה, like he plotted, but not like he actually did! What? How does that make sense? The answer is because in Judaism, what you plot, your plans, are more powerful, have more spiritual weight, than the actions that are done! So much so, that Yosef ended up being the “firstborn” of Yaakov, and, as such, got double portion, Menashe and Ephraim, because on that first night of his wedding, Yaakov thought he was with Rachel, not with Leah!  And that thought carried through: that Yosef, Rachel’s first child, ultimately became Yaakov’s firstborn!

Why is thought more powerful than action? Because we don’t decide what will happen in life, anyway. We only decide what we want to decide, how we want to think and plan.   רַבּ֣וֹת מַחֲשָׁב֣וֹת בְּלֶב־אִ֑ישׁ וַעֲצַ֥ת יְ֝קֹוָ֗ק הִ֣יא תָקֽוּם Man plans, and G-d laughs. Even the person who is responsible for making a fence on his roof, and he does not, this week’s parasha tells us, that if a person fell from the fenceless roof, it was meant that he fall and die, anyway. כִּ֤י תִבְנֶה֙ בַּ֣יִת חָדָ֔שׁ וְעָשִׂ֥יתָ מַעֲקֶ֖ה לְגַגֶּ֑ךָ וְלֹֽא־תָשִׂ֤ים דָּמִים֙ בְּבֵיתֶ֔ךָ כִּֽי־יִפֹּ֥ל הַנֹּפֵ֖ל מִמֶּֽנּוּ  The one who fell, was anyway going to fall! So, why do I need to put up a fence, if anyway, everything is preordained? Because I need to be a responsible person, regardless. I need to plan to prevent, because that is all G-d holds me accountable for. To plan. To think ahead, as if I am responsible for my actions!

The way to change your כיוון, your direction, is with your כוונה, your thinking.  Ever wonder how Yizkor money can bring up the soul in Heaven, if the person’s life is over? How can dedicating a Sefer Torah in the merit of someone elevate their Neshama, if that person did not make that choice when they were alive? Isn’t death “game over” for free choice? The answer is that this soul wanted to do many mitzvoth, but did not get a chance. This person learnt Torah, but could not keep it the way he wanted to. So, now, even though the person is no longer here, his intention is alive!

This is the reason why when a man dies childless, and his wife marries his brother, and they have a child, the child is given the name of the deceased. Because when someone marries the way the Torah intended, his intention is only to build a family. That intention, that direction, is still in the world, as if that person is still in the world! A person who is a פצוע דכא ,who does not have the ability, physically, to have marital relations, is not allowed to marry in to G-d’s People, because marriage is not about being a couple, but about the intention to build a family, a legacy, insuring that the intentions of the father live on, in the children. When we pray, we put our feet in the direction of the Bet Hamikdash, because that is בית חיינו – the place of our souls. Even if we can’t get there, ourselves, we hope that our children can get there.

We need to do Teshuva for our bad intentions, even if we did not actually follow through with those intentions. That is what is meant in the words והחזירנו בתשובה שלימה לפניך . What does it mean – a “Teshuva Shelema”? Is there a Teshuva that is not Shelema? That is not complete? Complete Teshuva is when you do teshuva on your direction, not just on your actions! As we see in Parashat Mattot, from the words  וַֽיקֹוָק֙ יִֽסְלַח־לָ֔הּ כִּי־הֵנִ֥יא אָבִ֖יהָ אֹתָֽהּ , that even when a person actually does not do anything wrong, but just intended to wrong, he needs a סליחה, a forgiveness. The Rabbis explain this passuk to refer to the example of a girl under her father’s responsibility who made a neder not to eat a certain meat.  Unbeknownst to the girl, the father had annulled the vow.  When the girl ate the meat, thinking that she was guilty of a transgression, but, in fact, she was not – she must have G-d’s forgiveness for her intention, not for the act.

So the Yetzer gets us to do the worst is by getting us used to it, through habit. Humans can get used to anything, even the most immoral, despicable things!

not for the act.ntion, for her thinking that she ilty of a transgression, but, in fact, teeetAt first, sin can look horrible; but then, we get used to it. As we find in Parashat Nitzavim,      וַתִּרְאוּ֙ אֶת־שִׁקּ֣וּצֵיהֶ֔ם וְאֵ֖ת גִּלֻּלֵיהֶ֑ם עֵ֣ץ וָאֶ֔בֶן כֶּ֥סֶף וְזָהָ֖ב אֲשֶׁ֥ר עִמָּהֶֽם  At first, idolatry looks disgusting, like dung; but then,  we get used to it, and it becomes like wood and stone, something innocent, and it doesn’t bother us. And then, it becomes silver and gold, something we chase after.

So, how do we change direction? First of all, we need to know how strong we are, how big we are. We need to believe in ourselves that we can change, and that we are not dependent on our past, no matter how hard it is to overcome our tendencies from the past. Second, we need to take it “step by step”. The greatest enemy to change is speed. Third, we need to internalize our faith, through our speech הֶ֭אֱמַנְתִּי כִּ֣י אֲדַבֵּ֑ר   and  אוֹדִ֖יעַ אֱמוּנָתְךָ֣ בְּפִֽי.  When you speak about Emunah in G-d, you start believing more. And when you speak about what you want to do, how you want to change, and you focus on it and visualize it, you will believe in yourself, and you will be preprogrammed for peak performance. What you say to yourself, before you go to sleep, what you focus on in bed, is how you program yourself for the next day. אִמְר֣וּ בִ֭לְבַבְכֶם עַֽל־מִשְׁכַּבְכֶ֗ם וְדֹ֣מּוּ סֶֽלָה:  If you write in big letters on a small piece of paper, I will do x, at the time of y, in the place of z, and you stare at it before going to bed, your thought of the act will intensify. When you say, x is what I want to do at y and z, because this is what I really want, you are empowering yourself. Writing down is key, as the passuk says, אָמַ֣ר עִם־הַסֵּ֔פֶר יָשׁ֞וּב מַחֲשַׁבְתּ֧וֹ (Esther 9;25) Most importantly, you will start imagining yourself doing those things that you wrote down. This will also help you fall asleep faster, when you go to sleep focusing on just one thing. The reason why people have a hard time sleeping is because the mind is racing. Planning before sleep will cause the mind to settle on just one thing.

If one does this exercise long enough, he will be able to start any new habit. Because he decided the direction he wants to go in.