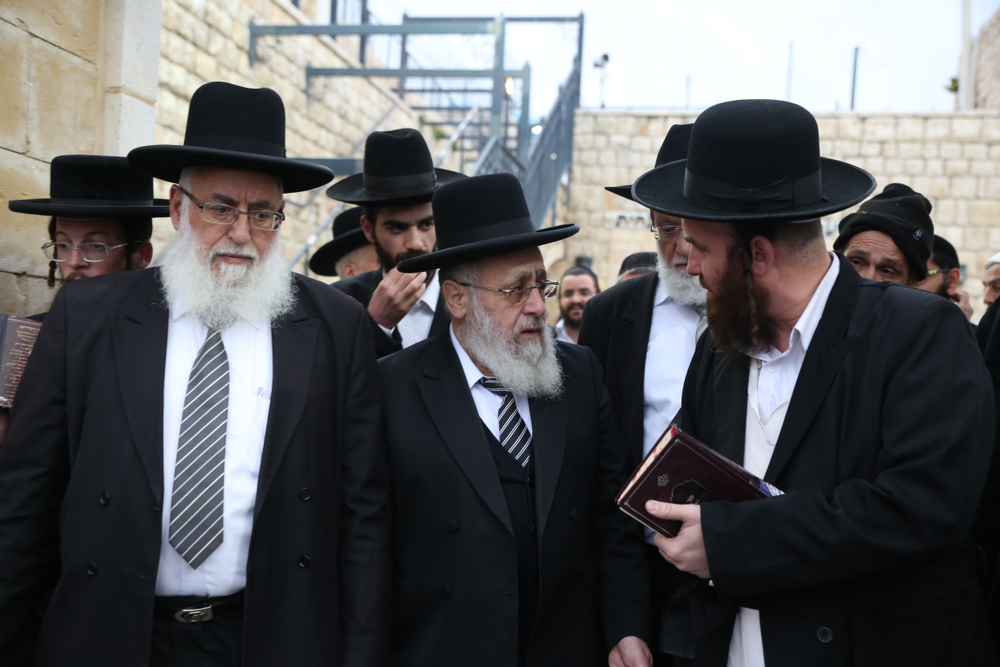 THE ART OF ASKING A RABBI

One of the worst things that has ever happened to Ultra-Orthodox Jewry is that it is not cool anymore to have a Rabbi that you consult with. It has become cool for people to be brave, to make their own decisions. It has become “in” for people to decide their own halachic behavior, or behavior when dealing with people, to feel that they are “grown up and can make their own decisions”. Until now, this was common in Reform and Conservative circles. But now, it has become part of our systems, as well. This causes great destruction, as we can see now, with “religious politicians” who do not consult with their Rabbis. They can choose injustice, unfair, anti-religious decisions in the name of the greatest values, when underlying their actions is a driving desire for power, pride or fame. On the way to achieving their personal goals, they are causing infinite damage to the entire Jewish people.

I have four people in the world whose opinion of me and what I say and do is important: my Rabbi, my wife, my father and my mother. And my Rabbi always has the final say. I can’t afford, emotionally, to care about what anyone else thinks. Recently, a girl in Shidduchim, was asked Hashkafa questions by the prospective yeshiva bachur, and was questioned as to what type of house she wants to build. The answer I told her to say, in the future, is simple. Whatever the rabbi of her husband will tell him is the way of the Torah, and what the Torah wants from us, that is going to be my Hashkafa as well. Simple. There is no place for opinion.

Some people think I am crazy, wrong, irresponsible, immature, for consulting with my Rabbis so much. I don’t care. I actually asked my Rabbi this question as well. He answered that Shaul Hamelech’s downfall was precisely from that point of not waiting for his Rabbi, Shmuel Hanavi. (Shmuel 1;13; 14) He had good answers not to wait for Shmuel, but no answer is good enough to justify not asking a Rabbi. Although Shmuel told King Shaul to wait for him, Shmuel had not yet arrived, the people were leaving, the Pelishtim gathered to wage war against Israel, and Shaul still had not yet prayed … All the good excuses in the world. From this point of not listening to his Rabbi, Shaul was destined to lose the royalty, as Shmuel said, “וְעַתָּ֖ה מַמְלַכְתְּךָ֣ לֹא־תָק֑וּם בִּקֵּשׁ֩ יְקֹוָ֨ק ל֜וֹ אִ֣ישׁ כִּלְבָב֗וֹ וַיְצַוֵּ֨הוּ יְקֹוָ֤ק לְנָגִיד֙ עַל־עַמּ֔וֹ כִּ֚י לֹ֣א שָׁמַ֔רְתָּ אֵ֥ת אֲשֶֽׁר־צִוְּךָ֖ יְקֹוָֽק” But now, your kingdom shall not continue; YKVK has sought for Himself a man after His heart, and YKVK has appointed him to be a ruler over His people, for you have not kept that which YKVK commanded you. G-d is not interested in “kings” that are so brave that they make decisions, without consulting with their rabbis. No matter how great or brave you are, no matter how right, virtuous and altruistic you seem to be, and no matter how many excuses you have!

This year someone told me that according to the opinion of the Shelah, it took down Nachshon Ben Aminadav, Aharon’s brother-in-law, and the forefather of King David! Nachshon was one of the Nesiim, one of the 250 great Rabbis who joined Korah’s argument against Moshe! As great as he was, and he was one of the greatest men to walk the face of the earth, he made this grave mistake. Nachshon, who was so brave, who was the first to enter the raging Yam Suf, did something without a directive from Moshe, and that was praiseworthy and rewarded.  But when joining Korah to be a “rabbi-less” Jew, after G-d had given the Torah, he should have first asked Moshe or Aharon to explain their position of their positions.

I wanted to write this idea, this week, but I asked my Rabbi, if it is appropriate to write this about Nachshon, especially because the Torah did not mention who those who joined Korah were, probably because the Torah wanted to hide the identity of the great men who fell. My Rabbi said, absolutely not! Nachshon, who was the forefather of the King David dynasty and was praised for his actions, would not have joined Korach! I looked into it more, and found that the opinion that Nachshon was part of those who joined Korah, is not an accepted one! Although it is clear from the Seder Haolam 12 that Nachshon died in the second year of the desert, the accepted opinion is that he died by the מתאוננים! And even the Shelah’s words can be interpreted differently!

Either way, even if Nachshon was not in the fight against Korah, amongst the men who joined Korah against Moshe were men of the greatest stature. We learn from the way the Torah mentions who Aharon married, אֱלִישֶׁ֧בַע בַּת־עַמִּינָדָ֛ב אֲח֥וֹת נַחְשׁ֖וֹן, that Elisheva’s brother was Nachshon, to teach you that when someone marries, he should check to see what type of brothers she has, because her brothers have the nature that will be found in her sons. And behold, the two older sons of Aharon, Nadav and Avihu, died, for using the acclaimed nature of Nachshon to jump to do what their heart tells them is the will of G-d, even before being told do so, in the wrong way!!  As the Midrash Sechel Tov tells us, Nadav followed נדב רוחו, the generosity of his spirit. אביהו , Avihu, that he said, “Aharon is my biological father, not my father for advice.” And Nadav and Avihu, even though they were greater than Moshe and Aharon, their not being willing to accept guidance caused their downfall!

Even King Solomon, who was one of the wisest men ever, fell after he did not have his Rabbi, Shimi Ben Gera, anymore. Immediately after Shimi was killed, just one Passuk later, (Melachim1; chapter 2-3) King Solomon married the daughter of Pharoah! Although K. Solomon did this with the intention of לתקן עולם במלכות ש-די, to make a universe that would serve G-d, it was the beginning of King Solomon’s downfall. That’s what happens when one does not have a Rabbi, even if he is the wisest of men!

In today’s busy and “connected” world, people do not have time to ask Rabbis. They would prefer submitting a question, electronically. There is no personal connection with a Halachic authority or mentor. But the more connection, the better. Here is a story that will blow your mind.

My mother, may she merit all the blessings of the Torah, told me last Shabbat the following story. For those who don’t know, my mother, answers all the Kashrut questions regarding the different products, for the JSOR, the Kashrut of Deal, where my father is the Supervising Rabbi and coordinator. One of the most amazing things about the Syrian community is that there are women who, according to the way they dress, you would never think they would be so particular when it comes to Kashrut. My mother, who answer the questions of the three WhatsApp chats, of 1000 people each, said that there was one such particular woman who would bombard my mother with questions, of even things like the kashrut of soap. My mother always answered her questions with due diligence, no matter how trivial they seemed to be.

One time, this woman Whatsapped my mother. “Mrs. Farhi, I ask you the smallest questions and you always are so kind to take the time to answer me. Mrs. Farhi, I am presently in the hospital, and I am on the bed waiting for the doctor to come in and do an abortion. The doctor said the baby will not be a healthy one, and it will be a big deal to me and my family to have such a baby. I just had this thought that if I ask you every small question, I should ask your advice regarding this question, as well.” My mother responded that she does not have the authority to answer such questions, but to wait, as she will immediately take the details of the doctor’s opinion, and my father will bring it to the authority who is able to answer such questions, R’ Moshe Feinstien’s closest, right-hand man. The woman waited for the response. The Rabbi said that she cannot go through with the abortion!

This woman got off the bed and started preparing to leave. The doctor came into the room and asked her where she was going. She said, “My Rabbi said I cannot make an abortion, so I do what my Rabbi tells me.” The doctor gave her this confused, and then angry, look. “Ask your Rabbi, if he is willing to be the one to bring up this child!” The woman, calmly, turned toward to the door, confidently saying, “I trust my Rabbis. I only put in my body what they tell me to. And, I will not take out of my body what they tell me not to.”

It turned out that the baby girl needed just minor surgery, and was totally fine! My parents help people they never saw, including this woman, just because they are Jews! 10 years later, when my parents were in the airport before a flight, they noticed a mother and a 10-year-old girl, pointing at them. My parents asked if everything was okay. Do we know you from somewhere, or do you know us? The mother explained with a tear in her eyes, “Yes, this daughter is the girl that I almost killed. But because of my trivial Kashrut questions, you saved this daughter. Thank you!”

← THE ART OF WEARING TZITZITTHE ART OF BEING PROMOTED →