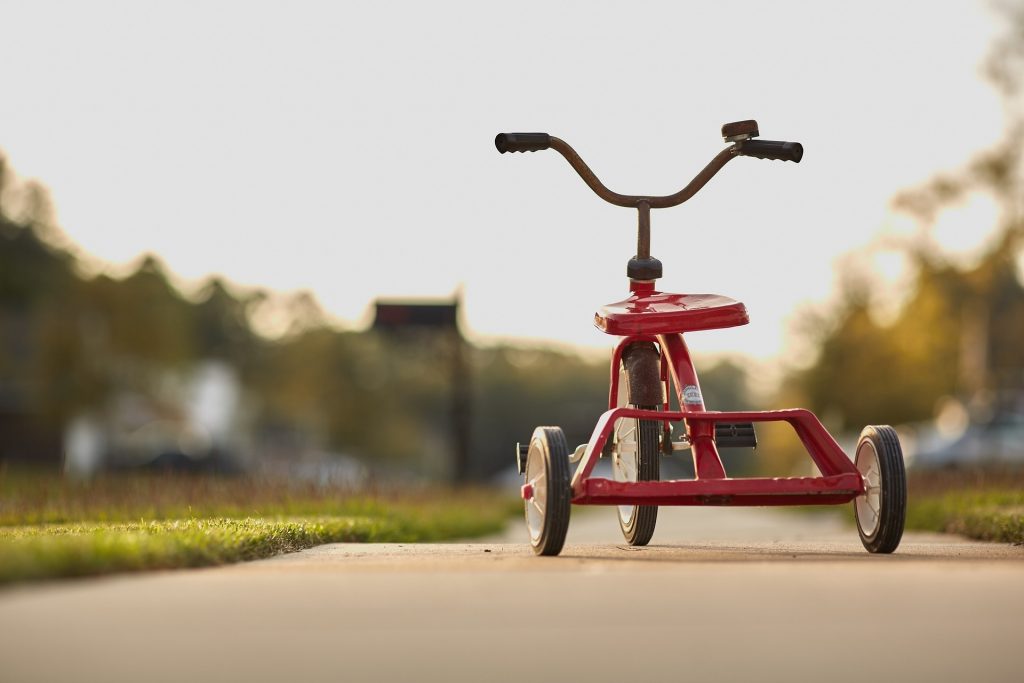 GET OFF MY TRICYCLE!!

I remember the first time I decided to help out teenage kids at risk. A certain teenage boy from a religious family, who was “on his way out” of religion, came into my life. I wanted to know whether or not I was wasting my time trying to help him. I sat with someone with many years of experience and success in the field, hoping that he would teach me how to know if I was doing something worthwhile by investing my efforts with him. He taught me how to recognize “the red line”. I can never forget what he told me.

It is a waste of your time to talk to a boy who has brazenness, an  “עז פנים”,   because it says, עז פנים לגיהנם “Brazen-faced go to Gehinom”. Once a boy has this type of brazenness, you cannot work with him, because he is going in the opposite direction. You are working against the tide. I’ll give you an example of what I mean. Once, I had some yeshiva boys from the Yeshiva I worked in over for a Shabbat meal. The boys stood outside on the porch, while I was helping my wife get things ready to start the meal. One of the boys on the porch sat down on my kid’s tricycle, something that he could break. I did not feel that because I was having over boys who were struggling with religion that my child needed to suffer and have his trike broken. So, I went outside and asked him nicely, please don’t sit on my son’s bike. You can break it. He got up and apologized. I went upstairs to continue helping my wife with the kids, and from the upstairs window, I saw that the same boy sat down again on the same tricycle. I came down, I called him over to the side, and told him that I am not interested in having him at my meal, if he couldn’t respect my son’s possessions. If he was so brazen to come to my house, eat my food, and not respect a simple request not to sit on my son’s tricycle, there was no hope of achieving anything by working with this boy.

I asked this Rabbi how he knew he could speak like that to the boy at risk. Weren’t you afraid you could lose him? He told me that a boy who is brazen, is already off anyway, for brazen-faced go to Hell. “At the moment, he is a lost case, a waste of time. His problem is mostly a psychological one of basic respect and decency, and his problem is much more than a religious one.

I asked him, “Maybe he is just not respecting you, as a person, but he does respect G-d.”

The rabbi told me that it is not so. The Midrash teaches, כל הכופר בטובתו של חבירו סופו שיכפור בטובתו של הקב”ה Anyone who denies the good that his friend does for him will end up denying the good that  G-d does for him. Something we learn from Pharaoh, who first denied the good that Yosef did to him, אשר לא ידע את יוסף and then denied the good and the existence of G-d, לא ידעתי את ה’ (Tanchuma Shemot 5). If he has no sense of embarrassment and respect for his host, he has no respect for G-d, the Host of the World. He knows of G-d, and he is not embarrassed from Him.

What ended up happening was that the boy blushed, and said he was wrong. Once he realized how low a person he had become, the boy starting improving his behavior, from that Shabbat table on.

Blown away by this idea, of the severity of being brazen faced on practical terms, I realized something amazing. When we say Tachanun, there is a fundamental  introduction that is crucial for getting forgiveness from G-d. שאין אנחנו עזי פנים וקשי עורף… Please G-d, … accept our prayers, for we are not brazenfaced and stiffnecked, to say in front of you we did not sin. Our saving grace, the power behind our plea for forgiveness, is that we are not brazenfaced, at least during Tachanun.

From the Mishna it seems that brazenness is the make it or break it factor, for Gan Eden or Gehinom. To go to Gan Eden, we need to have some type of embarrassment from G-d,  that we owe Him so much, and whatever we do for His Sake, can never be enough. On the other hand, when doing the will of G-d, we need to tap into and internal brazenness, and be brazen like a leopard. Why is this juggle of emotions so important? Either you are brazen, or not brazen!?

The Bet Yosef, in his halachic compilation, writes about the psychology of people, something that is somehow a halacha, not just mussar. The Bet Yosef asks, why is it of such great importance to have brazenness, that it is mentioned before being swift, or being mighty, when doing G-d’s Will? (OH 1) The Bet Yosef answers, if you want to be religious, if you want to keep halacha, you need to be brazen to go against the “norm”. Why is that so? The Bet Yosef writes, because it is human nature to fear what others think. That is one of your greatest and most powerful drives in life – what people think about you. People naturally care more about what people think about them, than they care about what G-d thinks about them. And there is proof to this concept:

R Yochanan Ben Zakai blessed his students with his last breath,  יהי רצון שתהא מורא שמים עליכם כמורא בשר ודם May it be the Will (of G-d) that you have the fear of Heaven on you, as you have fear of people. . אמרו לו תלמידיו: עד כאן? His students asked him, that’s it? (Fear of G-d should only be up to the degree of fear of people?)  – אמר להם: ולואי! תדעו, כשאדם עובר עבירה אומר: שלא יראני אדםHe said to them, I wish! Know this, when a person does sin, he says (to himself), I hope no one is watching! (Berachot 28b)

It was said in the name of R’ Meir, Why did G-d give the Torah to the Jewish People? Because they are עזין, they are brazen. (Betzah 25b) If you want to bring up your kids to keep halacha, you need to teach them to be brazen, in the right place and the right time. To swim against the current, and be different, if that is what G-d’s will is.

← A Lag B’Omer LessonWISHING TO BE A JANITOR →