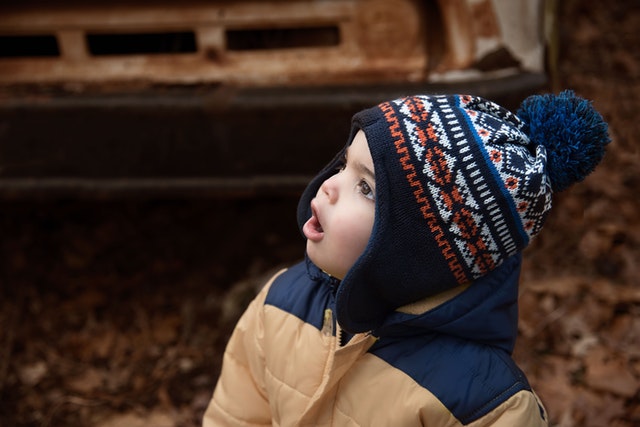 At the beginning of the Parasha, before the plague of the locust, G-d tells Moshe, לְמַ֡עַן תְּסַפֵּר֩ בְּאָזְנֵ֨י בִנְךָ֜ וּבֶן־בִּנְךָ֗. I will bring these plagues on Pharoah, in order for you to tell of it in the ears of your children and grandchildren.  What was so special about the plague of the locust that only here, not in reference to any other plague, G-d said that we are to tell our children and grandchildren?

It is interesting. Each plague was a month. A week of plague and three weeks’ break. That means that the plague of Firstborn was Nissan, Darkness was Adar, (ליהודים היתה אורה ושמחה וששון ויקר), And Locust was Shevat. Even before this plague of Locusts, in the beginning of Shevat, Pharoah had tried to bargain. לכו נא הגברים Let only the men go now. The children stay in Egypt. Only the men need to go to serve G-d, not the kids. Moshe said, nothing doing. We are not leaving anyone behind. So Pharoah refused, and opted for the plague.

In essence, if we wanted to worry about our own spirituality, alone, we could have just left the children behind, for the meantime, while we go to Har Sinai and accept the Torah. But, by staying for another three months, until Pharoah gave in, by slowing down our own spirituality for the sake of the spirituality of the children, we merited וּלְמַ֡עַן תְּסַפֵּר֩ בְּאָזְנֵ֨י בִנְךָ֜ וּבֶן־בִּנְךָ֗. The power of connection, that our children will be willing to listen to religion, and to trust in it enough, to pass it down to their own children.  Because the only way we can affect our children, to keep them religious, is to slow down for them.

Slowing down does not mean lowering our own level of observance, for their sake. It means having patience with them; it means taking interest in their seemingly simple values. It means recognizing that they are not moving at our pace, and it requires us to learn what is on their mind. To be emotionally present with them.

There is a power-question I use when trying to connect with people. What do you do in your spare time?  This question helps me find the values of the person I am trying to connect with. And in order for me to coach someone successfully, I need to build rapport. And rapport is dependent on how well you connect. It is a mistake to think, “I am too much above this”, “My Shabbat table should be only Divrei Torah”. If you want to influence, you need trust. If you want trust, you need rapport. If you want rapport, you need to slow down.

When R Moshe Feinstien came to test yeshiva bachurim on the Perek they learnt, R Moshe did not end up testing them. He asked them, What do you do in your spare time? They said, “We play basketball”. R Moshe opened up the conversation: “In what ways can you play basketball like a Jew, differently from a Gentile?” Because R Moshe knew that to influence, you need rapport, you need to bond. To be Mekarev effectively, you cannot use the “Join Us” method. That one does not work. Effective Kiruv is about getting a person from his own point A to his own point B. From the Jew he is, to the Jew he wants to be. ON THEIR TERMS. Because the only way you can connect, is on their terms.

This reminds me of a story from Rabbi Nachman of Breslov. There was once a prince who went through an identity crisis and came to the conclusion that he was really a turkey and not a human being. The king was ready to do anything to cure his son. The finest doctors and psychiatrists tried to cure the prince, all to no avail. The king was at a loss, until a gentle-looking, wise man came to the palace. He offered his help, which the king and queen were ready to accept.

The following day, the prince had company under the table. It was the wise man. “What are you doing here?” asked the turkey prince. “Why are you here?” “I am a turkey”  “Well, I am also a turkey,” The wise man began to gobble like a turkey and peck at the crumbs on the floor. The prince was convinced. A few days passed in this fashion.

The process continued. The wise man convinced the prince that it was not forbidden for turkeys to eat human food, which surely tasted better. Then came sitting at the table and enjoying human conversation. Within a short time, the turkey prince, although still maintaining that he was a turkey, began conducting himself exactly like a regular person.

So many times, we can’t help others because we are so busy with our own spirituality, projects, or just busy being busy. Rabbi YY Rubinstien said, in the name of his Rebbi, something very powerful. We know that Reuven saved Yosef from his brothers, by putting him in the pit. Then, the brothers sat down to eat lunch, and during lunch, Shimon and Levi decided to kill Yosef. Yehuda saved Yosef by selling him. Reuven came back to the pit, and Yosef was gone. Reuven tore his clothes, and asked his brothers what they had done. And, now, how was he to face his father?

Rashi asks, where was Reuven at the time of the sale? Why did he disappear when his brothers sat down for lunch? Because Reuven went to do his fasting, sackcloth and ashes, for his hasty act of moving his father’s bed next to his mother, Leah’s, so many years earlier.

But Reuven! You could have saved us all from 210 years of slavery in Egypt, if you would have just stayed there at the pit and watched over your brother! If you would not have been busy doing Teshuva, but instead, had kept your eyes on your brother in the pit, you could have gotten forgiveness for your mistake from your father, just by being responsible and saving your brother Yosef’s life!!

This reminds me of a sad story. Chaim had been a faithful Jew and was in the hospital, breathing his last. The family called their rabbi and asked him to be with them. As the rabbi stood next to the bed, old Chaim’s condition appeared to deteriorate, and he motioned frantically for something to write on. The rabbi lovingly handed him a pen and a piece of paper, and Chaim used his last bit of energy to scribble a note before he died. The rabbi thought it best not to look at the note at that time, so he placed it in his jacket pocket.

At the funeral, as he was finishing his eulogy, he realized that he was wearing the same jacket that he had been wearing when Chaim died. He said, to himself and the crowd,  “You know, Chaim handed me a note just before he died. I haven’t looked at it, but knowing Chaim, I’m sure there’s a word of inspiration there for us all.”He opened the note, and read, “Hey, you’re standing on my oxygen tube!”

How many times do we not realize that because we are so busy with our own growth, or with our “status”, that we are stepping on the emotional oxygen tubes of our loved ones?

← THE WATER IN YOUR STRAWMY BELOVED, MY HORSE →