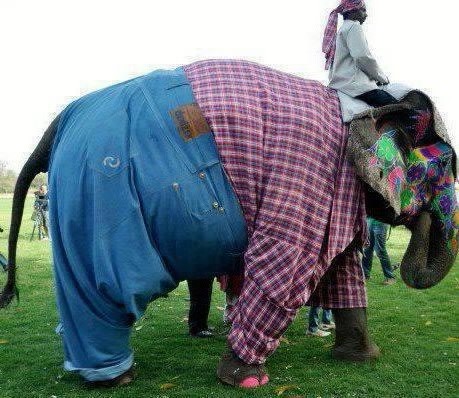 ELEPHANT IN THE LIVING ROOM

Rabbi Meir the Great, of Premishlan (1703–1773), disciple of the Baal Shem Tov has a great Hassidic twist on the words we say every day in אז ישיר. זה א-לי ואנוהו אלקי אבי וארממנהו. This is my G-d and I will glorify Him, the G-d of my father and I will exalt Him. R’ Meir tweaks that a bit. There are two types of relationship with G-d. There is זה א-לי ואנוהו, , this is my G-d and I will build Him a dwelling place in my heart, (נוה  also means dwelling place) and there is אלוקי אבי וארוממנהו. The G-d of my father and I will exalt Him.  In other words, you can find G-d in everything, even point to Him, from your awareness alone, and serve Him by making room for Him in your life. Or you can just continue serving Him only because He is the G-d of your father, and only because you were taught to do so, because you are used to doing so, ignoring Him in the present. When you serve G-d this way, you ultimately exalt Him, or keep Him somewhere above you, but not in your life.

What stops us from being able to recognize G-d in the world we live in? Why is it so difficult for so many to bring G-d into their lives?

There is a power in the universe. That power is Amalek. Amalek is a nation whose whole purpose of existence is to take this awareness away from us. He wanted us to ignore that awareness, by showing us that in all those miracles in Egypt and at the Sea, nothing really happened. Even when it is clear, that this is my G-d, Amalek is able to get us to doubt our acknowledgment of G-d and our connection to Him. Amalek wanted to take away that excitement that made us able to point to G-d and say, That’s the G-d I want in my life. Amalek wanted to replace that fiery enthusiasm with, “That is the G-d of my father, but the G-d I never met.” Amalek wants to force us to ignore the “elephant in the living room”.

I found a certain truism in life. The things that we fear and focus on the most turn out, in the end, not to be that big of a deal to tackle. But many times, the things that we fear the least are the ones that turn out to be the biggest issues we need to deal with in our future. Our health, our children, our Olam Haba. The amount of things we can focus on in life is limited. We tend to concentrate our awareness on things that are more urgent than important.  Amalek is that nation that symbolizes the single-minded attempt to divert our focus away from G-d’s power to the power of Man. And to ignore the entire Creation that sings זה א-לי.

A few years back, I was waiting to speak to R Moshe Shapiro, zt’’l. The person before me was someone who approached R’ Moshe, his Rebbe, and introduced his new son-in-law, asking for a beracha. Then, he said, “Rebbe, I had an idea I wanted to share with you. I want to know if it’s true.  שושנת יעקב צהלה ושמחה בראותם יחד תכלת מרדכי  The Rose of Ya’akov was ecstatic and joyous when they beheld, together, how Mordecai was garbed in royal blue. Why were the Jews happy when they saw Mordechai dressed in T’chelet, the bluish dye that is used for Tzizit? And what is the word יחד , together,  referring to? And we see that the Megillah mentions a second time that Mordechai was dressed in t’chelet: ומרדכי יצא מלפני המלך בלבוש מלכות תכלת Then Mordechai left the presence of the king in royal robes of blue. Why does the Megillah remind us, again, that Mordechai is wearing T’chellet?

The Talmud teaches us, in Sotah (17a), the reason why T’chellet is the color that G-d commanded us to wear on our Tzitzit. מה נשתנה תכלת מכל מיני צבעונין? מפני שהתכלת דומה לים, וים דומה לרקיע, ורקיע דומה לכסא הכבוד, שנאמר: ויראו את אלקי ישראל ותחת רגליו כמעשה לבנת הספיר וכעצם השמים לטהר, וכתיב: כמראה אבן ספיר דמות כסא. The T’chelet was chosen because the T’chelet blue is similar to the color of the sea, and the sea is a similar color to the sky, and the sky is similar to the Throne of Glory. By wearing blue strings, one is constantly reminded of G-d, just from the associations one makes with that color.  Now Mordechai, who was Shaul Hamelech’s descendent, inherited the task of disposing of Haman, who was of Amalekite descent. At the end of our Parasha, G-d says כִּֽי־יָד֙ עַל־כֵּ֣ס יָ֔הּ מִלְחָמָ֥ה לַיקֹוָ֖ק בַּֽעֲמָלֵ֑ק מִדֹּ֖ר דֹּֽר upon which Rashi quotes the Tanchuma to explain, אין השם שלם ואין הכסא שלם עד שימחה זרעו של עמלק  The Name of G-d י-ה – ו – ה  is not complete, and G-d’s Throne is not complete, until the Name of Amalek is eradicated. (תנחומא ס”פ תצא) Now, as mentioned earlier, the Throne of G-d is the color T’chelet. And because Mordechai eradicated Haman through prayer, through bringing the people together, through fasting, through Torah, and through bringing awareness of G-d to the people, he merited this T’chelet, this bluish dye, as he was the one who made the Throne of G-d complete. And he was the one who brought the Name of G-d י-ה  to be whole with G-d’s other letters, ו-ה .

R’ Moshe responded that this is, of course, the explanation.

G-d’s Name is not complete until we pray for its completion.  Until we say,  זה א-לי, seeking and finding G-d in our lives. The words יהא שמיה רבא מברך  is the prayer that the Name of G-d that is now only י-ה become full, become complete, through our prayers. (Machzor Vitri ; Tosefot Berachot 3a)