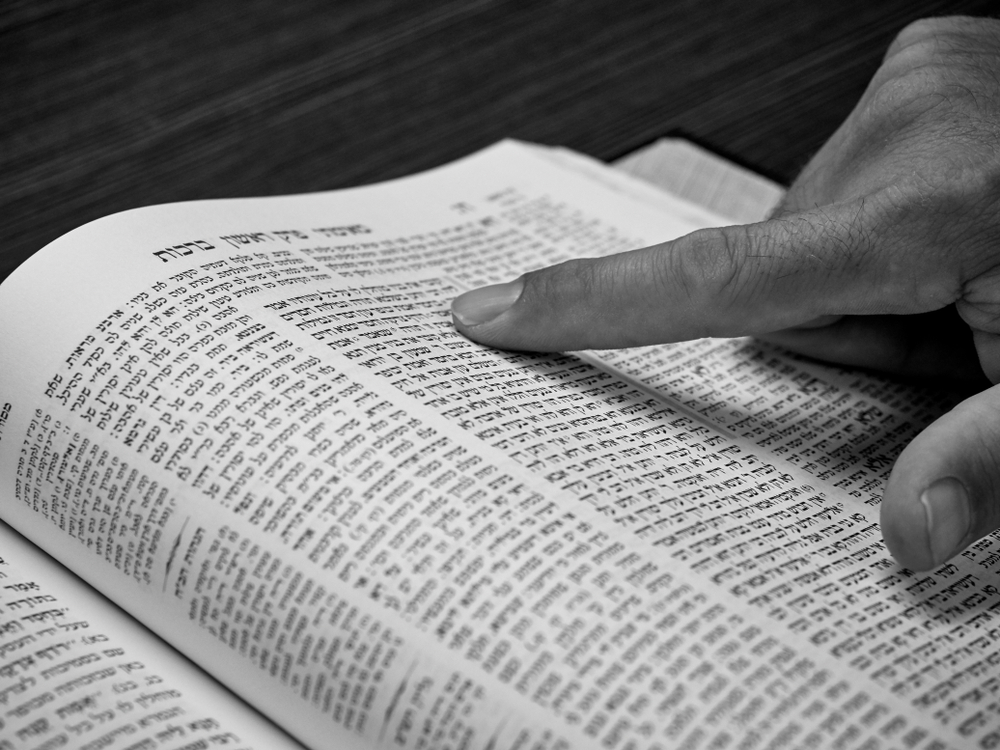 THE ART OF CREATING ANGELS

Orthodox Jews believe, that there is nothing more powerful in the world, than learning Gemarah in a way, that will bring clarity to the actual Halacha. The back and forth, the questions and the answers, the give and take of the commentators and how they are brought in the Beit Yosef, is what keeps the world spinning, prevents tragedies, and brings blessings. ( See Sanhedrin 91b)

Learning the commentators, understanding what is a good question, and what is not, is the dearest thing to G-d, in His entire Universe. As great as learning Zohar is, it is even greater than learning Zohar. And learning Zohar is one of the greatest things in the world, even if you don’t understand what the words of Zohar are talking about. Learning Zohar brings you to fear G-d, to be connected to Him, it helps fix the sins of the Baal Teshuva, it fixes the soul, cleans the heart from impurity, builds worlds, brings someone to love G-d and believe in Him, saves a person and his family from plagues, protects you if you learn it before sleeping, brings the Redemption, and saves people from the birth pangs of Mashiach. (Various sources) Still, learning Talmud, is greater!

The Talmud tells us the story that proves the point. Rabbi Shimon Bar Yohai hid from the Romans who were out to kill him, in a cave in Pekiin, for 13 years.  For thirteen years, R’ Shimon slept without clothes, on dirt, and his skin was cracked, and blistered. When he came out of hiding, his father-in-law, the great R’ Pinhas ben Yair, was helping him in the bath house, to deal with his wounds. R’ Pinhas cried, as he saw the cracks and blister on the skin of his son in law, and his salty tears were dripping onto the open wounds of R’ Shimon, burning R’ Shimon from the salt.

R’ Pinhas said to his son in law, “Woe is to me that I have seen you in such a state!” R’ Shimon, though, answered, “You are lucky that you see me in such a state! If you did not see me going through the thirteen years in the cave, you would have not found me now at this level, with the Torah capabilities that I now have! Before entering the cave, when I had a question in learning, you would be able to answer me with 12 answers. Now, after the level of Torah learning I reached in the cave, when you ask me a question, I can answer it with 24 answers!” (Shabbat 33a)

What?!? I thought that R’ Shimon in the cave was able to author the Tikunei Zohar, and learn with Eliyahu Hanavi, and live within miracles! Why is it, that when R’ Shimon reflects on the gain he had gained from the difficulty of dwelling 13 years in a cave, he speaks only of his ability to answer questions in learning, his growth in the give and take, the discussion of Torah learning?!?

The main thing that brings all the blessings of the Torah to the world, is dwelling in the back and forth of Talmud, as the passuk says before that all the blessings of the Torah are reserved for those who learn it in such a way. אִם־בְּחֻקֹּתַ֖י תֵּלֵ֑כוּ  Rashi comments, that this means, עמילות בתורה, toiling in Torah, in a way that you will know how to act upon, what really is, the intention of G-d.

Rabbi Shimon Bar Yochai himself said it. “Anyone who places the words of Torah to heart, they take away from him 24 harsh things. Thoughts of sin, death from terror and war, difficulties from government, mistakes and foolishness, Yetzer Harah, and overthinking thoughts of work and finance, unnecessary thoughts, etc..” (Tanna Dbei Eliyahu Zuta 16)

What does that mean, to put the words of Torah to your heart??? It means, for you to take your Torah learning seriously enough, that you can carry on a discussion concerning it, asking questions and answering them. Taking your Torah learning personal, as when the Talmud refers to the opinions of the Amoraim, it says, אליביה , according to, which literally means, on the heart of. This is what differentiates the Torah students from the rest of us. That they take their words of Torah, to heart, as if nothing is more important in the world, because, in truth, nothing is.

R’ Yohanan, the great Amora in the Talmud, exemplifies this. R’ Yohanan had from the most difficult lives. He lost his ten sons in his lifetime, and all the pain and suffering did not budge his ability to stay focused and learn. But when he lost his student Reish Lakish, the student who for 24 questions he had, Reish Lakish had 24 answers, after such a loss, R’ Yohanan could not bear that pain anymore!

But of course, like all things in spirituality, the most important things, are the least popular and in demand.  It is much more in demand, to go to an entertaining Torah class, with a moving story, a great Mashal, some good quotes and a couple of jokes. It is much more interesting and enticing to solve problems spiritually, by going to pray by a Tzaddik’s kever, taking off Ayin Hara with lead, or going to see some Mekubal, than learning Talmud in depth, or supporting Yeshivot, kollelim, and their students.

Every word of Torah you learn or think about, you are creating angels, that defends you and proclaims you merit in Heaven. In just one minute, a person is able to say 200 words. Every word of Torah, is a Mitzvah, and it is a Mitzvah that is so great, that it is worth 613 mitzvoth. Every word creates an angel. So, in one minute, a person is able to create 200 angels. (Torat Habayit Chafetz Chaim) If when someone is learning in depth, he says less words as he thinks more, and he may be creating less angels when contemplating the commentators at length, but, even if he creates less angels, the angels he creates, are much, much bigger and greater angels.

Some people think that living on Billionaires Row in Manhattan is a good place to live, or in Chelsea and Kensington in London, where you might get to network more to people who have more or are networked more. I have been lucky enough that my apartment in Bayit Vegan Jerusalem is surrounded by Torah learning. On one side of me, is the Yeshiva of Wolfson, one of the greatest yeshivot in the world, with over 1000 students, where the sound of boys learning could be heard until 2 in the morning. On the other side of me is one of the greatest elementary yeshivot in the world, with over a thousand students. I actually have foot traffic on the sidewalk of my one-way street, when people are on their way to learn Torah or prayer. Every other building next to me, is a yeshiva, a Kollel, a Beit Din. There is a Kollel of every type, Halacha, Gemara, Kabala, and more. Within a 3 minute walk, there is a shul of every custom. French Moroccan, Israeli Moroccan, Israeli Sephardic, Syrian custom from Mexico, Syrian custom from Argnetina. Ashkenaz Yeshivish, Ashkenaz Baal Bayit, Hassidic Sephard. Hardal, Mizrachi, an international minyan factory, and there are a bunch more, that I can’t even keep track anymore. This is all not including the minyan in my building on the floor -2. Friday nights, and Shabbat day, after the Shabbat meals, the shuls load up with people, who come to learn till the late hours of the night, all parts of Torah. What the nicest of it all, is, that everyone feels comfortable and accepted, everywhere. My apartment is literally surrounded by angels. There is no greater networking than that.

This reminds me of the story that happened outside R’ Moshe Feinstein’s home. There was once a frantic knock on the door of R’ Moshe’s house. A boy got hit by a car and was laying on the floor right outside his home. The one who was knocking, asked R’ Moshe if he can call an ambulance. He told R’ Moshe that the boy that was hit by the car was a Jewish boy, as the boy who was hit was holding a yarmulke in his hand. R’ Moshe let him use his phone, but said, that this boy is not a Jewish boy.

If you can’t make it to Meron this Lag Baomer, there is something that is even greater you can do, than going to Meron on Lab Baomer. You can learn the teachings of R’ Shimon, in depth, and this way, you can connect with R’ Shimon’s wisdom of Torah, which is greater than connecting with R” Shimon’s body. And there is a special Heavenly help, to learn His Torah, on the day of his passing. (If he actually did pass on Lag Baomer)

I remember, attending the funeral of R’ Wachtfogel zt”l, in Lakewood BMG, when I was a young yeshiva bachur. It was too stuffy inside for me, and I did not understand the yiddishe eulogies. So, I decided to go downstairs, to the library of the yeshiva, and learn something in his merit. As I was tired, hungry, and was just in a stuffy place, where we were all wearing hats and jackets, I was a little wiped out. I asked G-d to help me, that although I left the funeral of the great Rabbi, that the Torah I will be about to learn should be for his merit. Without even looking, I picked any random sefer off the shelf, … and the Sefer I picked up, was Leket Reshimot, R’ Wachtfogels sefer!