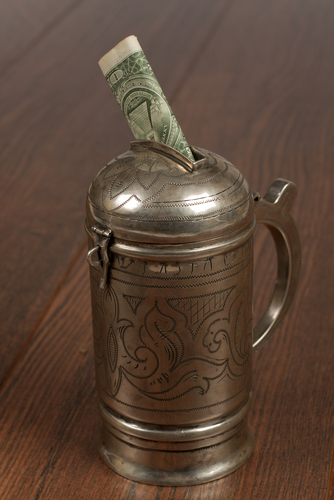 THE ART OF ALTRUISM
Parashat Emor
by Rabbi Yosef Farhi
Rashi points out that right in the middle of the Torah’s detailed discussion of all the Jewish yearly Holidays and their respective laws and sacrifices, there is a law that seems to be unrelated to the subject. After speaking of the cutting of the barley used for the Omer sacrifice, the Torah commands that one leave the corner of the field, as well as the bundles of grain that had dropped, for the poor and for converts. What is the reason for citing this Mitzvah here, in a seemingly unrelated context?Rashi answers: this is to teach you that anyone who gives gifts to the poor, the Torah considers it as if he had built the Beit Hamikdash and brought sacrifices! It is as if he had gone up on the Three Festivals to rejoice in the Beit Hamikdash!

It seems like a mitzvah of relatively minor importance. But in its merit, we have King David and the royal lineage of our people. Ruth met Boaz, only because of this Mitzvah. From that relationship, David’s ancestor was born. It is incredible to see how far an act of chessed can go. And it is amazing how, when we give to the unfortunate and needy, we can be the catalyst for them to achieve the greatest things.

In Tannaic times, the period immediately after the destruction of the second Temple, the Romans murdered many great Rabbis for teaching Torah. In those dangerous times, R Hanina ben Tradyon, who would teach Torah in public while holding a Torah scroll, came to visit R’ Yossi Ben Kisma, when R’ Yossi was sick. R Yossi warned him that if he continued to teach, the Romans would eventually burn him alive, wrapped in a Sefer Torah. R’ Hanina asked R Yossi if R’ Hanina would deserve Olam Haba. R’ Yossi asked R Hanina if he had ever had a test while doing a good deed. R’ Hanina replied that he was tested once, when he mixed up his own money with Tzeddaka money, and he did not pay himself back from his mistake with Tzeddaka money. R’ Yossi said,” If so, I wish that my portion in Olam Haba would be like your portion!” (Avodah Zarah 18a)

The Sefer Meir Derech asks how it could be that for R Hanina’s teaching Torah in public in hard times, with dedication and devotion, was not enough to reward him with Olam Haba?! Just for that one act of doing Tzeddaka without paying himself back, in this merit, R’ Hanina deserves an Olam Haba that R’ Yossi is now jealous of?

The answer is amazing. We all know the famous teaching: R’ Hanina ben Akashya said, G-d wanted that we should get reward (in Olam Haba), so he gave us a lot of Torah and Mitzvoth.

The Rambam (End of Mishna Makkot) writes that for one to get Olam Haba, he needs to do a Mitzvah with no ulterior motives. יְקֹוָ֥ק חָפֵ֖ץ לְמַ֣עַן צִדְק֑וֹ יַגְדִּ֥יל תּוֹרָ֖ה וְיַאְדִּֽיר: Hashem wills for His merit, not for ours. That Torah will become great in quantity, and in quality. (גדול is quantity. אדיר is quality.) No honor and fame, no pleasure, no material gain in return. The ticket to Olam Haba is a Mitzvah, even if it is just one of quality, that is done out of pure love of G-d and His commandments. That is why G-d gave us so many Mitzvoth, so that at least one of them, at least once in our lives, would be done with the right intentions. Without thinking of how we can make ourselves great, but how we can bring about G-d’s greatness. As great as it is to gather people and teach them Torah, teaching in public is still a public act! On the other hand, no one knew of the good deed that R Hanina did with that Tzeddaka money, for everyone thought that it wasn’t his own!

The reason why it is so great to give Tzeddaka from the corner of the field, or from the bundles that dropped is that no one thinks it is something special! You cannot drop a bundle on purpose, and the corner of a field is not something that you have much choice about, so you can’t claim any fame for it! Most mitzvoth a person performs are mitzvoth that people can get to know about. But the mitzvah that no one knows, that is your ticket to Olam Haba!

During Coronavirus times, people are disappointed. People expected that Mashiach was going to be here before Pesach. During Hol Hamoed, before the month of Nissan was up. But Mashiach did not come. Mashiach does not come because we want life to go back to normal. Mashiach does not come for us to make us great. He comes to bring clarity to the age-old question as to Divine justice: “Why do bad things happen to good people, and good things happen to bad people?” He comes to make the world recognize that G-d is One. Religion is not about living a better life, although that is one of its perks. It is about making this world a place where all the souls can play their own, special soul-songs to G-d. If that is not what we want, then we do not really want Mashiach. And that is why he is not here yet.

I received a phone call last week from a close friend, Mr. Morris Dweck. Mr. Dweck asked if I could write something in memory of his close friend and consuegro, Mr. Stanley Chera, a” h, on his behalf, and on behalf of his wife, Renee. So I wrote this week’s article about altruism in Stanley’s merit.

I did some research on Stanley, and I learned a lot about altruism from this great man. He was a champion of supporting projects with the greatest and most prolonged impact – for the most people possible. Never saying “no” to the needy. Mr. Chera didn’t just give charity. He invested in charity. He didn’t feel that he was “parting” from his money: he was investing in Olam Haba and in the merit of those who would live on after him.

Stanley had a heart for tradition and heritage. He was a prominent leader of the SCA, an organization established to reinforce and preserve the traditional Sephardic way of life. Stanley believed that Judaism thrives within communities, when each and every Jew feels that he is a part of something bigger than him or herself. That is why he supported the Sephardic Community Center.  He loved Israel and its simple, but special, people – so he helped build the Rabin Medical Center, one of Israel’s major hospitals and medical centers, located in Petah Tikva. Mr. Chera believed that often, preventing problems is much more important than solving them. He was a realist and invested in helping people who would escape from reality. That is why he generously supported SAFE, an organization that provides clients and their families with counseling and support in dealing with addictions. SAFE educates all ages on the dangers of addiction and its prevention. Mr. Chera knew that if you save a soul, you have saved a world. Stanley was a big supporter of the National Jewish Health hospital in Denver, the leading respiratory hospital in the United States. Among the outstanding and exemplary projects that Stanley was involved in was The Special Children’s Center. The Center is a non-profit, professional provider of services to over 450 families with children and adults with special needs. The Center is a place that eases the overwhelming challenges experienced by special needs families. It is a place with round-the-clock, year-round respite services available any day, any hour, at any stage of a special child’s life. The Center is committed to doing whatever it takes to help these families, whatever the need, whatever the situation.

Stanley was the power source of the heartbeat of our community, our synagogues and schools. And the sweet sounds of Torah and prayer continue to sing in Brooklyn, Deal and Florida, in his merit. In his quiet, unobtrusive manner, after a funeral, Mr. Chera would walk over to the widow and whisper something in her ear. Only recently did people find out that he would tell the widow that if there was ever anything she needed, she should feel free to give him a call! A champion of chessed and empathy.

As President Trump publicly noted that Stanley not only built a successful career, he also built up people. His kind and generous spirit that stemmed from his faith will be part of his lasting legacy, carried on through his family and through the many people he has reached.

← THE CHOICE OF EXTRAORDINARINESSTHE ART OF MEANINGFULNESS →