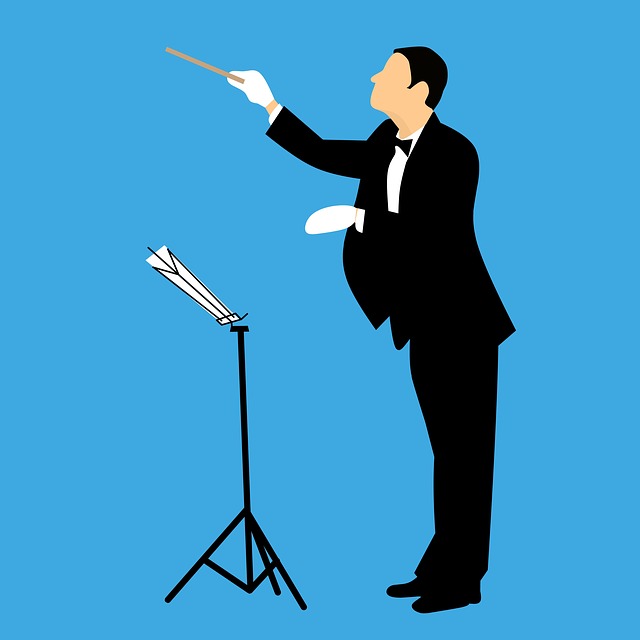 My mother sent me a speech given by a music conductor. This is what the conductor told his audience.

“At the age of 45, I had already been conducting for more than 20 years, and suddenly, I was struck by this fascinating insight: the conductor of the orchestra does not make any sound! The greatness of the conductor is his ability to make other people make great sound. This changed everything for me.

David HaMelech refers to G-d as למנצח, To the Conductor. What a beautiful way to describe G-d, a Being that cannot be described. G-d has been conducting music from the beginning of time. All of what has ever happened, all that is happening, all that will ever happen – all is music conducted by G-d. We, all of creation, are G-d’s musicians. And the Conductor of the orchestra does not make any sound Himself. His greatness is his ability to make His orchestra produce great sound. A thought that we can meditate on for eternity. (It is no coincidence that David Hamelech, who personified the Middah of Malchut, of Bitul, was the one to refer to G-d as the מנצח, the Conductor.)

What is actually mindboggling is that G-d sometimes allows us to be His conductor, and He actually plays music for us: He changes the natural course of events. R’ Kahana says, in the name of R Yishmael, son of R Yossi, “What does it mean when it says Lamnatzeach? It means, sing to the one who allows us to conduct Him, and He is happy” (Pesachim 119a). Rashi explains that Hashem gives us the power to conduct Him.  How, exactly, do we “conduct” G-d?

When Moshe prays for Miriam’s recovery, he does not just pray. He draws a small circle in the ground and stands in the middle of it. He says to G-d, I will not move from this spot, until you cure my sister אֵ֕-ל נָ֛א רְפָ֥א נָ֖א לָֽהּ (Bamidbar 12;13; Avot dR’N).

Moshe, what are you doing? Are you manipulating G-d? Moshe, I thought you were the humblest of them all! How do you “put G-d up against the wall” like that?

The answer is because G-d actually allows us to conduct Him!! He is actually happy when we conduct, and He plays to our music. We are not allowed to do this circle thing. We know that Choni HaMagal also did it, and he almost got excommunicated for it by Shimon Ben Shetach, for you need to be very close to G-d to pull such a thing off (Taanit 3;8). We cannot draw circles and talk like that to G-d, but we do put our feet together when we pray, as if we are not going anywhere without G-d. We hold our hands down, as if we are chained. We are saying to G-d, I can’t move from this spot without You. I can’t solve my problems, without You. I can’t think, get cured, bring parnassah, do Teshuvah, bring the Mashiach, make peace, without YOU. I can’t even open my lips, I can’t even pray without You. G-d, please, make music! Do Your thing!

You know, it is actually interesting. Moshe draws a circle, not a square. Choni’s last name became HaMaagal, because of the circle he drew, Agol. Why the circle? Why not a square?

Ever noticed that G-d did not create square things? Raindrops, flowers, faces, fruits, clouds, grass, trees, sun, moon, stars, planets, etc… they are all round. G-d created only round things. He expects mankind to finish off the job, to make a square Mishkan, with its square utensils, and square tzizit and square tefillin; i.e., “square” means adding the last touches to perfect things. He wants us to bring His world to perfection.  So, when Moshe cries out to G-d, he says, “I am nothing without You!! I cannot perfect the world without YOU! I cannot even get out of the circle that you put me in, without You, G-d! Without G-d, I am powerless”. And then, G-d plays His music.

There is something that G-d created on the sixth day of Creation, at the very last second of twilight. He created Tongs (Avot 5;6). Why was it so important for G-d to create tongs? You can only make tongs with tongs. You cannot shape metal in fire with your hands. So, who made the first pair of tongs? Who put his hands in fire long enough to shape the first metal, so that we can have tongs to build machines, planes, space shuttles, reach the moon, to make water out of air? G-d. Anything humans ever made, G-d says – Hey, I started you off! I gave you the instruments. Now, it is your turn to make the music. But when we are stuck, when we pray, when we realize how we cannot make music without Him, G-d plays our music for us.

G-d, Himself, leads the world silently; He is the Master Conductor. Human leaders, as well, lead best when they lead silently. There is the preacher, the persuader, the orator. And there is the silent leader, the conductor.

Moshe Rabeinu was the greatest leader our nation ever had. He transformed a nation of slaves into a nation of princes. He gave infinite courage to an infinite nation. What was his greatest talent? He was definitely not a good orator, for his speech was halting. The Torah does not single Moshe out for his courage, miracle work, scholarly level, love and care for each and every one of his people… The Torah mentions only Moshe’s humility. וְהָאִישׁ מֹשֶׁה עָנָו מְאֹד מִכֹּל הָאָדָם אֲשֶׁר עַל פְּנֵי הָאֲדָמָה (Bamidbar 12;3)

Why is humility the single trait to be singled out, out of all of Moshe’s leadership qualities? Because the greatest leaders are conductors, for only the conductors can bring out the best music from their orchestra, from those they lead. And the greatest conductors, the ones who truly lead the people in their lives, are the most humble ones, not the ones who make noise, attract the most attention, or anything of the sort. The way they lead is not by what they say, but how they say it. It is not what they do, but how they do it.

Rabbenu Bachye points to the way the Torah spells the word humility here when referring to Moshe. ענו. What? Why is the word ענו spelled without the letter Yud? Isn’t it supposed to be עניו?

The Yud was taken away from Moshe, because Moshe lacked the letter Yud in his humility. הֲמִן־הַסֶּ֣לַע הַזֶּ֔ה נוֹצִ֥יא לָכֶ֖ם מָֽיִם Will we (Moshe and Aharon) be able to take out water for you from this rock? (Bamidabar 20;10) Uh, one second. Moshe, YOU AND AHARON are going to bring out water, or G-D will bring out water? The word should have been   יוֹצִ֥יא, which would mean, He will take out, and not נוֹצִ֥יא which would mean, we will bring out! Because of that one letter, because Moshe did not mention that G-d will take out the water, his Humility Metal got a little scratch; it was not perfect, even if it was the best ever. If Moshe would have chosen the right way of saying what he said, if he would have let G-d play all the music, and leave himself as only the conductor…Moshe would have been perfectly humble, a true עניו.

Silent Leadership is G-d’s way of leading. It is the only leadership that really makes the eyes of those we lead shine.

Selfie Steps to lead the people in your life effectively through Silent Leadership.

← The Self Help AddictTools for Lashon Hakodesh 1 →